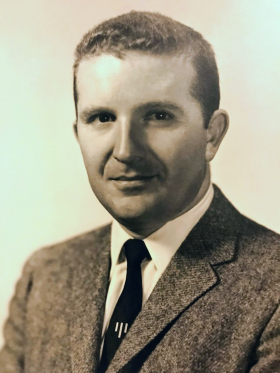 Frank Herman of Menlo Park, California, passed away on August 11th, 2021 after a decade long struggle with Alzheimer’s. Born on March 21, 1926, he was 95 at the time of his passing. Frank was born to parents who immigrated from Russia and was raised in New York City. He moved to California in 1962 where he lived for the rest of his life.

Frank showed an early aptitude for mechanics, math and science which would set the stage for his entire career. He attended the Bronx High School Science (1943), and Columbia University in New York City, where he completed a bachelor’s (1945) and a masters degree (1949), both in electrical engineering. He spent two years serving in the Navy where he worked at various communication security installations. He simultaneously taught at Cooper Union while working on his master’s degree. He joined RCA Laboratories in June, 1949 as a Research Engineer in Princeton, New Jersey, while working on his doctorate degree in Physics from Columbia (1953).

These were exciting times for scientists and he was pleased to receive an offer from Lockheed in Palo Alto, California in 1962. In 1969, he began his work as a Research Physicist for IBM in San Jose where he worked for the rest of his career.

His work in physics included two patents, over 120 scientific publications and over 250 lectures, given at conferences throughout the United States, Europe, Mexico, Brazil and Japan. He received numerous awards and honors for his work in Theoretical Physics and Solid State Physics.

Frank always spoke highly of the many scientists he worked with, and met at conferences all over the world. His own work was inspired by the work of others he delighted in new developments in all aspects of science and technology.

While at Columbia, he met his future wife, Sondra who was a student at Barnard College, majoring in Political Science. They married in 1953. In a sense you could say that Frank was an early feminist. Frank was very supportive of her career, which was unusual for the mid-1950’s. She completed her PhD in History and spent her career teaching history and doing research in the field. Frank and Sondra raised three daughters all of whom pursued careers in Math and Science Education, Medicine, and Landscape Architecture respectively. He mentored women scientists as colleagues and postdocs with utmost respect and admiration.

His curiosity and work ethic are shared by his wife, daughters and grandchildren. His family will miss his lively dinner table discussions, his contagious laughter and his ability to analyze and solve problems. He loved travel, movies, opera and scientific reading.

He is predeceased by his parents, Philip and Sonya Herman and his daughter, Suki Herman Pollak and son-in-law, Oren Pollak.

The family offers many thanks to the caregivers at Moldaw Residences and Gordon Manor for their expert care during his final years. A private service was held on August 15, 2021 by Rabbi Ezray of Congregation Beth Jacob, Redwood City, California. Contributions in honor of Frank Herman can be made to Second Harvest of Silicon Valley, an organization that provides food to the needy. https://www.shfb.org/