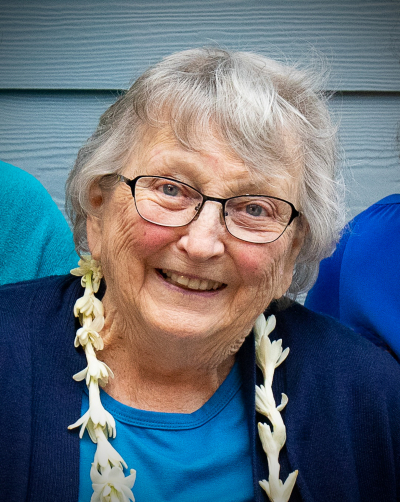 Mary Ann Herbert passed away in Woodland, CA on April 23rd, 2022, after a years-long struggle with dementia. Mary Ann was born 90 years ago in Bywood, PA and spent her early childhood with her family in Pennsylvania and Maryland. When she was seven, her father suffered a fatal heart attack, a loss that Mary Ann carried with her throughout her life. Her father’s tragic death was followed by a move from Springfield, PA to Washington DC, where her mother found work as a Practical Nurse at St. Elizabeth’s Hospital.

Young Mary Ann developed exceptional cooking, sewing and child care skills which allowed her to help supplement their meager family income. She became a life-long voracious reader during her middle school years and developed a love for writing at Anacostia High School, where she was an editor and columnist for the school newspaper. It was during her high school years that she began dating schoolmate Tom Herbert, who she had met at the age of ten and married at the age of nineteen.

Mary Ann helped support Tom as he attended college and law school by working as a clerk and secretary in a succession of US Government jobs, including a stint at the Signal Corps office while Tom served in the US Army in Augusta, GA.

After the birth of their first child, Terry, Mary Ann and Tom moved to California in 1959 so Tom could begin his career as a patent attorney in San Francisco. They lived for a few years in San Carlos, where they were happily joined by two more children, Suzanne and Tom Jr-Tommy. Their love of the country led them to build a house in Portola Valley, where they lived for almost 40 years.

Mary Ann was a homemaker extraordinaire. Her focus on family and community was reflected in the creation of many beloved family traditions, from holiday celebrations (her Halloween witch impersonation made the Herbert house a prime trick-or-treat stop) to participation in school activities and town events. Her many volunteer activities included Girl Scout leader; Alpine Hills Swim Team timer/record keeper; Little League and Bobby Sox scorekeeper and team manager; elementary school office aide and room parent; middle school nutrition teacher; Woodside High School scholarship coordinator…basically she helped out in any activity in which her children participated. But she was also able to find time to nurture her own interests, taking oil painting classes and enrolling at the local Junior College.

Over the years, she and Tom (and their kids) put major sweat equity into their Portola Valley home, planting and nurturing everything on the property. They loved to host “breakfast in the woods,” law firm picnics and numerous celebrations with family and friends.

She loved to travel, and deeply enjoyed the entire travel planning process. This led to numerous family trips and eventually to her becoming co-owner of a travel agency. From cross-country road trips, to overseas adventures and cruises, Mary Ann cherished sharing new places with those she loved.

Mary Ann and Tom moved to Woodland after his retirement, where she continued devoting her life to helping others. She joined Soroptimist International, and as a member of Holy Rosary Church, volunteered to write sympathy cards for the community and bake cookies for inmates at the Yolo County Juvenile Detention Facility. She and Tom also participated in many church social activities.

Photo Gallery
0 photos Upload a photo
Remembrances
0 entries Submit a remembrance
Memorial service
A private memorial service for Mary Ann will be held in July at the Woodside Priory Chapel in Portola Valley with a reception to follow.
Make a donation
Memorial donations may be made in Mary Ann’s name to the charity of your choice, or to one of the following non-profits that Mary Ann supported: Daraja Academy https://daraja.org or KidZone Museum https://kidzonemuseum.org
About this site     Contact us