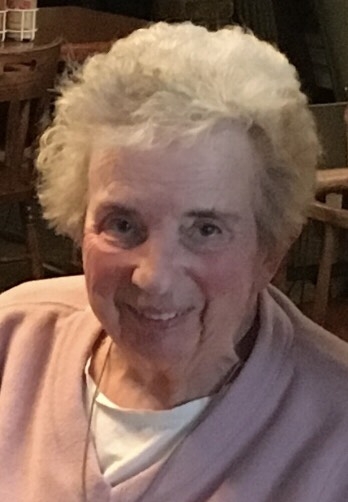 Judith Anne Roche Lucier, 84, a devoted Catholic and 30-year resident of Menlo Park, died July 17, 2019. Judy was born June 3, 1935, in Pittsburgh, Pennsylvania. She grew up in San Francisco where she attended St. Monica School, Presentation High School, and Lone Mountain College for Women. She joined Levi Strauss and Company as a clerk in 1958 where she met her husband of 57 years, Jack Lucier. In 1961 Jack and Judy were married and soon after, started their own interior design business which they operated for over 25 years. As a St. Joseph School room mother, PTA president, and auction chair, Judy always made sure she was an active participant in her children's school lives. Judy worked as the Executive Secretary to the Court Administrator of the Superior Court of San Mateo County from 1987 until her retirement in 2006. In her retired years, Judy enjoyed traveling, spending time with her 6 grandchildren, and volunteering for the past 13 years at Oakwood Retirement Center at Sacred Heart Schools. Judy was a staunch participant of Words with Friends. She was a fierce opponent, often juggling dozens of games at once. Judy was a fun-loving, deeply caring and dedicated wife, mother and friend. Her sarcastic and sharp sense of humor and witty come-backs will be missed by all who knew her. Judy is survived by her sister, Lorraine Roche (87) of Orinda, her son Christopher Lucier of Redwood City, CA; son Daniel Lucier (wife Moira, sons John and Michael) of Burlingame,CA; Mary Askins (husband Mark, daughters Julia and Emily) of Sammamish, WA; Anne Ashendorf (husband Michael, son Charlie and daughter Molly) of Mill Valley, CA.

Photo Gallery
0 photos Upload a photo
Remembrances
3 entries Submit a remembrance
From Linda Kennedy
Aug. 13, 2019
Judy had her hair done each week by Michael and her appointments were always such fun. Her stories and interactions with Michael Aemisegger who shared her dry wit were better than a night at the improv. She will be missed.
Memorial service
A memorial service will be held Wednesday, July 31, at 10:00 a.m. at St. Denis Church, 2250 Avy Ave., Menlo Park, CA 94025
Make a donation
Oakwood Retirement Center at Sacred Heart Schools.https://rscj.org/oakwood-retirement-center
About this site     Contact us