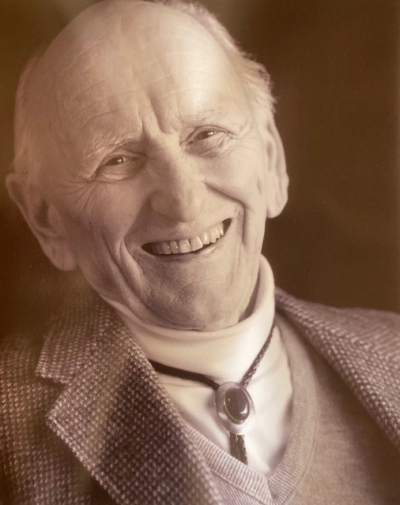 Howard Wieden Middleton passed away peacefully on April 20, 2021. He was 93 years old.

He was universally beloved for his affability, his optimism, and his infectious laugh.

Howard was born in 1927 in Tacoma, WA to Howard and Hazel [Wieden] Middleton. The family moved to the San Francisco area, where Howard and his sister Donna grew up in Alameda and Oakland. After high school, he enlisted in the Merchant Marine; he enjoyed regaling family and friends with stories of adventurous forays at sea and in foreign ports. Later, Howard studied business at Cal, was a proud member of the Psi Upsilon fraternity, and managed the Cal Men’s Crew team. He is commemorated at the entrance to the Cal Boat House. Howard loved nothing more than cheering on his beloved Golden Bears at football games.

Howard served as a Lieutenant in the U.S. Army, stationed in Virginia for most of his tour of duty. It was while on the East Coast that he met a spirited beauty named Arla Mellen, who became his wife of 56 years. The couple moved to Santa Maria, California, where Howard had a job with Caterpillar tractor. He would remain in the heavy equipment business for most of his career, rising to manager of Terex’s western division. His career involved many moves; he and Arla raised their growing family in Southern California, Ohio, Davis, and Portola Valley.

Howard was a dedicated member of his church, serving in various volunteer capacities at Christ Church Portola Valley, including as senior warden. He was an enthusiastic mentor to students through the campus ministry at Stanford University. In retirement, Howard and Arla reveled in traveling the world and visiting their children and grandchildren. Howard also continued to play golf and was particularly proud of his hole-in-one at Pebble Beach. Gregarious and friendly, Howard enjoyed many friendships among fellow residents of the Sequoias, Portola Valley. He also treasured every member of the extended Middleton and Mellen clans and loved attending family reunions in the Pacific Northwest.

Howard always enjoyed a challenging project, so, at age 85, he built a beautiful mountain house in Mount Shasta. He loved to gather there with family and friends and would spend hours gazing out his front window to take in the changing hues of the majestic 14,000-foot peak.

Howard is survived by two of his three children, Craig Middleton and wife Holly of San Rafael, and Hilary Wills and husband Geof of Los Angeles. His daughter, Debbie Hamilton, passed away in 2019. He had four grandchildren (Ella Middleton, Roxanne Wills, Casey Hamilton, and Will Hamilton) and three great grandchildren (Alissa, Breanna and Treyson Hamilton).

Photo Gallery
0 photos Upload a photo
Remembrances
0 entries Submit a remembrance
Memorial service
A memorial service will be held on September 25 at 2 p.m. at Christ Church Portola Valley.
Make a donation
Donations may be made to the Peninsula Open Space Trust. Link: https://openspacetrust.org/?gclid=Cj0KCQjw1ouKBhC5ARIsAHXNMI_2xQy3JaD7BbwN6JROyRaQfmC5wiR18fCbaf8zsyKKEJEkpIkgqgUaAsp6EALw_wcB
About this site     Contact us