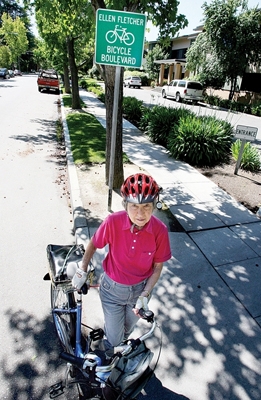 Ellen Fletcher, a former Palo Alto City Councilwoman who spearheaded the city's transformation into a nationally recognized bike-friendly community, died Wednesday, Nov. 7, after a battle with lung cancer, according to her friends and family. She was 83.

Fletcher, whose name has become virtually synonymous with Palo Alto's bicycle improvements, had been involved in bike-related issues for more than half a century. Her political activism began in the 1960s, when she took part in the grassroots campaign to prevent the expansion of Oregon Expressway, said her daughter, Terry Fletcher. She remained committed to local politics long after that, often advocating for bicycle improvements and various environmental causes.

In the early 1970s, she had served as safety chair at Fairmeadow Elementary School, where her son was a student. She continued to be a fierce advocate for bicycling and other environmental causes in 1977. Her leadership was instrumental in getting the city to launch the city's household-hazardous-waste program, pass anti-smoking laws and establish Palo Alto as a "nuclear-free zone." She was also an enthusiastic campaigner for local candidates, Terry Fletcher recalled.

"When I was young, when I'd say that I need a new pair of jeans or something, often her answer was, 'After the election,'" Terry Fletcher said. "It's perhaps not a coincidence that she died just one day after the election, even if she wasn't directly involved in it."

A Berlin native whose parents divorced when she was very young, Fletcher spent her early childhood in a series of foster homes and in a Jewish orphanage. With the Nazis coming to power, she was deported from Germany because her father was a Polish citizen, Terry Fletcher said. Though she was slated to go to Poland, she was able change course and reach London in 1938 thanks to the Kindertransport program, which focused on shipping Jewish children out of Nazi Germany and into Great Britain.

It was in London where she discovered bicycling. In a 2011 interview with the Weekly, she recalled coming to England and seeing that everyone out there was biking. She fell in love with bicycling and brought her passion to New York City, where she immigrated in 1946.

As a 17-year-old student at Hunter College, Fletcher rode a bike on campus year-round, a rare sight at the time. She told the Weekly that she was the "only one in college who had a bike on campus."

Fletcher moved to the Peninsula shortly after her college graduation, settling first in Menlo Park and later in Palo Alto. She lobbied persistently for biking improvements as a volunteer in the school district and as a council member.

She had told the Weekly that her aim in the 1970s was to put bicyclists on the radar of policy makers, who at the time were concerned exclusively with cars. Thanks in large part to her efforts, bicycle commuting became part of the city's transportation planning in the 1980s, according to Ward Winslow's "Palo Alto: Centennial History." The Bryant Street "bike boulevard" opened in 1982.

"That's really been the national philosophy all these years -- we've always put concentration on moving more cars faster," Fletcher told the Weekly in July 2011, recalling the late 1970s. "It's really the wrong policy."

Her legislative efforts didn't stop with bicycling improvements. As a resident of Greenhouse, an apartment complex on San Antonio Road, Fletcher once hung her clothes out to dry on a clothesline and was told by apartment officials that this violated the building's policy. She led the city in changing the law so that apartments would not be able to prevent residents from drying their clothes outside.

"They messed with the wrong person there," Terry Fletcher recalled.

The city recognized her leadership on bicycling in 2002, when the council officially named Bryant Street as the "Ellen Fletcher Bicycle Boulevard." Her efforts helped the city attain the designation of "Bicycle Friendly Community" from the League of American Bicyclists, a Washington, D.C.-based organization.

Her long list of awards includes the Palo Alto Civic League Citizen of the Year (1975); the Women's Transportation Seminar Woman of the Year (1989); the League of American Bicyclists Volunteer of the Year (1996); and the Bay Area Air Quality District Clean Air Champion Award (1997).

Fletcher's local legacy is expected to stretch for decades as the city embarks on a slew of other bicycle projects, including trails, a bike bridge over U.S. Highway 101 and new bicycle boulevards modeled after Bryant Street. In July, the city approved an ambitious new bike master plan that aims to make Palo Alto one of the nation's top bicycling destination. Even at 83 and suffering from cancer, Fletcher rode her bicycle to City Hall to attend public hearings on the plan and to advocate for bike improvements.

Former Mayor Peter Drekmeier called Fletcher a "hero" for her advocacy of bike issues. Drekmeier recalled attending meetings all over the Peninsula in recent years and seeing Fletcher there. No matter where the meetings took place, she got there by bike, he said. He also remembered an episode in which Fletcher received a ticket for running a stop sign while on her bike. She had no qualms about telling a local newspaper about the ticket, Drekmeier said. She thought it would send a good message -- even elected officials need to follow the law.

"I grew up riding the Ellen Fletcher Bicycle Boulevard and I thought about her every time," Drekmeier said. "I really appreciate what she did for our community."

Though Fletcher owned a car, a 1964 Plymouth Valiant, she was famous for almost never using it. The site of her pedaling through the city streets has been a common one for decades. She continued the tradition even in her early 80s, while afflicted with lung cancer. A lifelong champion of bicycling, she told the Weekly that she hopes to demonstrate to people that just about everyone can do it.

Fletcher is survived by children Linda of Palo Alto, Terry of Berkeley and Jeff of Sacramento, and grandchildren Simon and Martin of Sacramento.

Her memorial will be held Sunday, Nov. 18, at 1:15 p.m. at the Albert and Janet Schultz Cultural Arts Hall in the Oshman Family Jewish Community Center, 3921 Fabian Way, Palo Alto.

Donations in Fletcher's memory can be made to the Silicon Valley Coalition, 1922 The Alameda, Ste. 420, San Jose, CA 95126, bikesiliconvalley.org.

Photo Gallery
0 photos Upload a photo
Remembrances
0 entries Submit a remembrance
Memorial service
A memorial service will be held Sunday, Nov. 18, at 1:15 p.m. at the Albert and Janet Schultz Cultural Arts Hall in the Oshman Family Jewish Community Center, 3921 Fabian Way, Palo Alto.
Make a donation
Donations in Fletcher's memory can be made to the Silicon Valley Coalition, 1922 The Alameda, Ste. 420, San Jose, CA 95126. Link: http://www.bikesiliconvalley.org
About this site     Contact us