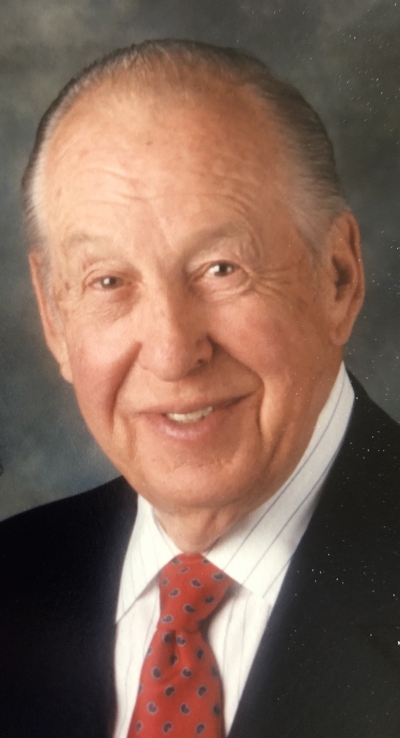 Edward Scott Brugge, age 99 - about 2 weeks shy of his 100th birthday, a resident of Menlo Park for 57 years, passed away on Thursday, July 18, 2019 surrounded by his adoring family and caregivers.

Ed was the loving and devoted husband of Anna for over 71 years.

Ed was born August 5, 1919 to the late Edward L. and Pearl L. (Simonds) Brugge in San Francisco, California. He was the oldest son of the family.

Ed graduated from Lick-Wilmerding High School in San Francisco in 1937. He worked for Forderer Cornice Works as a draftsman when he was in high school and continued until he was called in the 13th draft out of San Francisco.

On July 18th, 1941 Ed was enlisted in the Army before World War II. He was stationed in California, Florida, Wisconsin, and Paris, France during his service. After basic training they were looking for cooks. Once the group learned that his father was a butcher, and he knew how to pluck and clean a chicken, he was quickly moved to the kitchen. Later he was in the Infantry and later promoted to 1st Sergeant. He was discharged on January 11th, 1946 and returned home to San Francisco.

After being introduced by Ed’s cousin, Betsy Swearingen, Ed and Anna quickly started dating and became engaged. On April 11, 1948 he and Anna married in a beautiful ceremony in Oakland’s Lakeshore Baptist Church.

Ed then started his own business about the time that he was marrying Anna. They moved several times to Bellevue, Washington, Fullerton, California, and then to Menlo Park, California. He then left for a quick trip to Puerto Rico to set up a business there. He came back and decided he wanted a change. He then purchased Thornton and Mills Manufacturing. TM Mfg. Co. became a family business that both he, Anna, Michael, Carol, and even Michelle worked at until it was sold.

Ed and Anna loved to travel and visited Europe, Asia, the Panama Canal, and Canada. As well as a 3 generation family cruise to Alaska in 2000. He was a master at barbecuing the family’s Thanksgiving and Christmas turkeys. He also enjoyed his time golfing as a member of the Palo Alto Hills Golf and Country Club.

Edward belonged to the Freemasons in Bellevue, Washington, and member of the Sunnyvale Rotary, National Machining and Tooling Association (NTMA), and the Lick-Wilmerding High School Alumni Association.

Ed was proceeded in death by his children Michael Scott Brugge in 2014 and Lynda Ann Brugge in 2002.

In Lieu of flowers, please make donations in his memory to: Lick-Wilmerding High School – Development Office – 755 Ocean Avenue, San Francisco, CA 94112 (please mention the “Technical Arts Program” – for Edward Brugge in the memo) or the Sunnyvale Rotary at the 577 Connemara Way, Sunnyvale, CA 94087 (please mention the "Vets or Education Fund" in the memo)

Photo Gallery
0 photos Upload a photo
Remembrances
0 entries Submit a remembrance
Memorial service
A private service was provided for the family by Skylawn Memorial Park in San Mateo, California.
Make a donation
In Lieu of flowers, please make donations in his memory to: Lick-Wilmerding High School – Development Office – 755 Ocean Avenue, San Francisco, CA 94112 (please mention the “Technical Arts Program” – for Edward Brugge in the memo) or the Sunnyvale Rotary at the 577 Connemara Way, Sunnyvale, CA 94087 (please mention the "Vets or Education Fund" in the memo)
About this site     Contact us