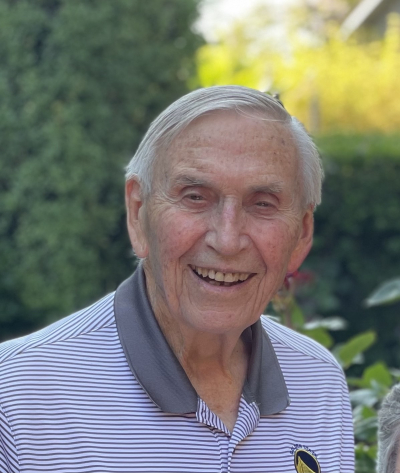 Carl Hugo Gotsch died at home on June 12, 2022. Carl was born on January 1, 1933 in Ontario, Oregon across the border from Parma, Idaho where he was raised. He was one of three boys born to Carl and Elly Gotsch who immigrated from Germany.

Carl grew up in a small farming community and looked back on his childhood fondly. While there was much hard work on the farm and he was known for shirking his share of it, he and his beloved brothers rode horses, camped in the hills, and fished in the creeks. In a small school system, he could start on all the sports teams and still be the lead in the school play. He would later say these opportunities were the foundation of a lifetime of multi-faceted interests.

While he never considered himself an athlete (he always set the bar high), he played basketball and baseball well-enough to compete on intramural teams throughout his life. He later took up tennis and golf – but spent more time practicing than playing both. He taught his daughters to ski, swim, play tennis and basketball. Those would be some of their most cherished moments with him as they also allowed for important conversations about life.

Upon graduating from University of Idaho with a B.A. and subsequently an M.A. in 1960, he was awarded a Fulbright Fellowship and headed to Germany. He loved his time there reconnecting with his family roots and immersing himself in the language. While he became fluent in German later in life, he kept the language until the end. He programmed his Google Assistant to speak to him in German. In his final days when reading became difficult, he spent hours watching opera on YouTube, particularly listening to the German Lieder, love songs he would translate for anyone who wanted to listen.

After Germany he returned to the US, married his love, Alexandra Mikailoff, and started his Ph.D. at Harvard. His daughters Sonia and Liza were born in Cambridge in 1962 and 1967 respectively. During the 1960’s, Carl worked in Mississippi after the Freedom Summer. He and one of his colleagues believed that as development economists they could be helpful to the Black communities. At the time the white farmers did not like a couple of Yankees coming in to help and soon the local sheriff found a reason to suggest that they “Go Home.”

Carl was known for his pioneering work on water resource development in South Asia, the Middle East, and North Africa. His work on tube well development at the time of the Green Revolution in Pakistan was enormously helpful in helping to change the country’s agricultural development strategy.

In 1972 the family moved to Beirut, Lebanon, where he showed his daughters irrigation methods that had been used for centuries. Beirut was a vibrant city, but unfortunately in 1976, the civil war forced an evacuation that eventually led to the family’s return to the U.S. Carl took a position at the Food Research Institute (FRI) at Stanford University where he stayed until his retirement.

Carl was adamant that the FRI faculty quickly adopt the new technologies associated with microcomputers. When he insisted on the advantages of opening an email account, he was told that this phenomenon was likely to be a passing fancy used mainly by geeks. Carl persisted, and FRI faculty were some of the first at Stanford to use emails regularly in their correspondence. Perhaps Carl's greatest contribution to FRI was his work in developing an improved Master of Arts program that emphasized practical techniques of analyzing agricultural policy issues and of selling the results through effective writing and PowerPoint presentations. According to one of his life-long colleagues, Carl was incredibly creative and had more ideas than anyone he had ever met.

His graduate students appreciated his kindness and patience in shepherding them through the Ph.D. process. One wrote “I was one of the many students who referred to him to as Uncle Carl in appreciation for the care he showed us.”

Carl retired from Stanford early but was the consummate life-long learner. He would grab hold of a topic, be it quantum physics, molecular biology, neuroscience, religion, the mechanics of a sport, the origins of a dance or music genre and read every book and watch every YouTube lecture available. He would get frustrated only by what he considered the limitations of his brain to get smarter on a topic – usually that came down to math. He always wished he were a better mathematician.

He applied this curiosity to any topic his children or grandchildren cared about as well. He had 4 grandchildren, Daniel, Emma, Maya, and Olivia. He was interested in whatever they were interested in, sometimes even more than they were. As teenagers, they often skipped lightly to new topics when he was just getting started. This occasionally created some mutual frustration. But how many grandpas are willing to debate the pros and cons of Nicki Minaj and Ariana Grande – or dissect Billie Eilish’s great song “Bad Guy?”

Carl always said he had been preparing for pandemic isolation for years, but in fact, it was because of the pandemic that he discovered Zoom and became the Zoom King. After years of sporadic and short phone calls, Carl and his daughters settled into a weekly routine of hour-long Sunday Zooms. He wanted to Zoom with everyone. In fact, if you didn’t have a computer with a camera, he was happy to buy you one. He loved everything about Zoom and he spent lots of time working on his lighting and background – Room Rater would have given him a “10!”

Carl’s final months were not fun with multiple hospitalizations and in and out of physical rehab. Luckily in the end he was at home being cared for by a wonderful team of caregivers who patiently listened as years of accumulated knowledge flowed out in relatively cogent lectures. After he passed away, they all said, “I learned so much from your dad.” It is unclear what they will do with his theories on the economic impact of climate change, but they no doubt felt smarter for having heard them.

Carl is survived and will be deeply missed by his two brothers, Hans and Bill Gotsch and their families, his wife, Alexandra, his daughters Sonia Chessen (Rick) and Liza Pigram (John), grandson Daniel, and granddaughters, Emma, Maya and Olivia.