Editorial: Brownrigg for state Senate
In the impressive group of candidates for California's 13th Senate district, we give the nod to Michael Brownrigg, who has... Last comment on Feb 19, 2020 at 10:32 pm | 25 comments

Peninsula Foodist
by Elena Kadvany
Portland's Thai food darling Pok Pok will be popping up on the Peninsula this spring
Feb 20, 2020 | 1 comment

"Dancing Little Girl"
At a Palo Alto Martin Luther King Jr. Day event, this very little girl was boogieing along with the singer of "Redemption Song." Submitted by Mitchell Zimmerman on Jan 16, 2017 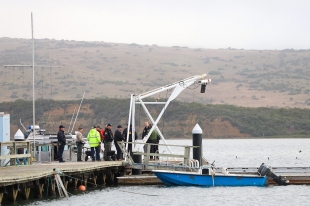 Looking 'beyond everywhere': Couple remains missing after fourth day of searches
As time ticks on in the effort to locate Palo Alto residents Carol Kiparsky and Ian Irwin, who have been missing for nearly a week in the small Marin County community of Inverness, the number of searchers has waned. Thursday, 3:04 PM | 12 comments

Despite a year marred by car break-ins and claims of police brutality, the Palo Alto Police Department saw several positive trends in 2019, including fewer assaults, burglaries and traffic collisions, according to its annual report. Tuesday, 4:49 PM | 28 comments

The Santa Clara County Public Health Department announced Thursday that a man who became the county's first confirmed case of novel coronavirus has recovered and been released from isolation. Thursday, 5:17 PM

A man arrested this week for attempted kidnapping in a Mountain View home had allegedly held another woman and her daughter hostage that same evening, according to new details released by the Mountain View Police Department on Thursday Thursday, 2:19 PM

The Palo Alto school board will consider approving in closed session next week a $1.5 million settlement with a former student whose eye was permanently damaged during a potato gun science experiment at JLS Middle School in 2017. Wednesday, 4:04 PM | 11 comments

Two men allegedly linked to 10 car burglaries in Palo Alto were arrested after a woman alerted authorities that they were breaking into her car at a downtown parking garage, Palo Alto police said. Wednesday, 6:26 PM | 5 comments

Meet the 7 candidates who want to represent you in Sacramento