Sentences for misdemeanor crimes will be served in home detention 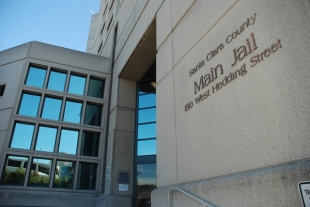 Most Santa Clara County courthouses have been closed due to coronavirus, and the remaining courts are being asked to release defendants on their own recognizance to reduce the jail population. Photo courtesy Bay City News Service.

Santa Clara County will release inmates and place them in involuntary home detention in an effort to reduce the jail population and lower the risk of spreading the new coronavirus across the county's jail facilities.

The county board of supervisors voted to give the Santa Clara County Sheriff's Office the authority to release inmates serving jail sentences for misdemeanor crimes due to "lack of jail space," placing them instead on home detention with electronic monitoring. The county has already bought an extra 100 ankle monitors to accommodate the release of inmates.

Since March 17, the county has been under orders by public health officials to avoid all social gatherings and maintain safe social distancing — defined by a 6-foot buffer between others. But maintaining that space in county jails is impossible without clearing out inmates.

"Because of the inherent conditions in which the County's jail inmates must live, and the close proximity of inmates, staff and volunteers within the jail facilities, proper social distancing protocols cannot be observed if the jails continue to function according to normal practices," according to a county staff report.

The sheriff's office has been on high alert for weeks, placing four inmates at the Elmwood Correctional Facility in quarantine after they were potentially exposed to the virus. Since then, a fifth inmate — a 31-year-old man booked at the county's main jail in San Jose — has tested positive for COVID-19.

Among the staff, a total of five sheriff's deputies have now tested positive for the virus as of Wednesday, all of whom worked together and are now self-isolating at home. The sheriff's office is still working to find who else may have been exposed.

Outside of home detention, the sheriff's office has banned all jail visits, including in-person meetings between inmates and criminal defense attorneys, though attorneys can still meet with members of the jail population by phone or by video conference. Programming that isn't legally mandated, like education courses, has been suspended as well.

In addition to releasing inmates, the sheriff's office is requesting that county courts reduce the number of people showing up in the first place. Rather than sending defendants to pretrial detention, courts are being asked to release more people on their own recognizance.

Find comprehensive coverage on the Midpeninsula's response to the new coronavirus by Palo Alto Online, the Mountain View Voice and the Almanac here.

Coronavirus: Plan ahead now for a big outbreak
By Diana Diamond | 22 comments | 4,723 views

The first few seconds after awakening; before I remember the virus
By Chandrama Anderson | 0 comments | 1,960 views

Can you Stay Healthy without Making More Trash?
By Sherry Listgarten | 2 comments | 1,260 views