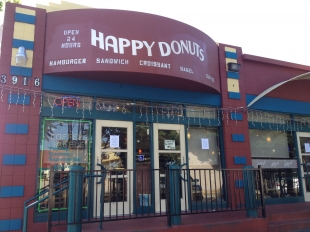 HAPPY DONUTS CUTS HOURS ... For years, Happy Donuts has been a late-night mecca for students, insomniacs and eccentrics looking for a place to grab some food, hang out and work on their laptops: It was the last of the surviving 24-hour restaurants in Palo Alto. Not anymore. The small, 800-square-foot eatery just south of Page Mill Road on El Camino Real is cutting its hours. According to a sign on the door, the restaurant's new hours are 5 a.m. to 11 p.m. It's unclear when the new hours will go into effect and why the restaurant has decided to limit its operation — the Weekly has been unable to talk to the owners. The new hours are probably the biggest change to occur over the years at the otherwise the timeless restaurant, which also serves sandwiches, pastries and bagels. Customers now and in its early days from up and down the Midpeninsula considered the diner the perfect late-night destination. "It's a very good place to go if you happen to be awake, because instead of sitting at home and being awake, you can go do something," customer Jeff Suhr told the Weekly in 2007. That sentiment hasn't changed. — L.T.

FLEGEL'S RELOCATES ... Flegel's Home Furnishings, the iconic Midpeninsula furniture and interior design store that the Flegel family has operated in Menlo Park for more than six decades, opened the doors of its new — and smaller — home on Monday, March 9. The showroom, less than a mile from its former longtime location at 870 Santa Cruz Ave., is located at 1010 El Camino Real, Suite 90, next to Kepler's Books in a space that the bookstore once occupied before downsizing. "We Have Moved" signs are posted in the windows of the old Flegel's site, which is now vacant. Business manager Brian Flegel announced the business' plan to move into a smaller site at the end of last year after the family put the 22,500-square-foot showroom up for sale. At the time, he said the store was in negotiations over a couple of different locations and expected to move in the first part of 2020. It's unknown who will occupy the old Flegel's building on Santa Cruz Avenue. — L.T.

Two popular San Francisco restaurants are now delivering on the Peninsula out of DoorDash's shared commissary kitchen in Redwood City: RT Rotisserie and the Italian Homemade Company. This means people in Palo Alto, Redwood City, Menlo Park, Atherton, San Carlos, Belmont and Woodside can now order RT Rotisserie's rotisserie chicken and Italian Homemade's fresh pasta for delivery or takeout. DoorDash's first-ever shared kitchen, which opened on Main Street in October, is allowing the restaurants to "reach an entirely new neighborhood of eager customers without the typical costs and risks associated with opening new storefronts," a DoorDash press release states. DoorDash provides the restaurants with infrastructure, marketing and maintenance; the businesses pay DoorDash rent and the same commission rate as for delivery from their brick-and-mortar restaurants. Both RT Rotisserie and Italian Homemade Company are quick-service, takeout friendly concepts with customizable dishes, such as a create-your-own rice bowl at RT Rotisserie and different pasta and sauce pairings at the Italian Homemade Company. They're sharing space with Chick-fil-A, The Halal Guys, Humphry Slocombe ice cream and Rooster & Rice at the virtual kitchen. — E.K.

Compiled by the Weekly staff; this week written by Elena Kadvany and Linda Taaffe. Got leads on interesting and news-worthy retail developments? The Weekly will check them out. Email shoptalk@paweekly.com.

I mean, if you're going to base the story as the "last 24 hr restaurant" it should really be the last 24 hour restaurant.

Coronavirus: Plan ahead now for a big outbreak
By Diana Diamond | 22 comments | 4,715 views

The first few seconds after awakening; before I remember the virus
By Chandrama Anderson | 0 comments | 1,951 views

Can you Stay Healthy without Making More Trash?
By Sherry Listgarten | 2 comments | 1,256 views