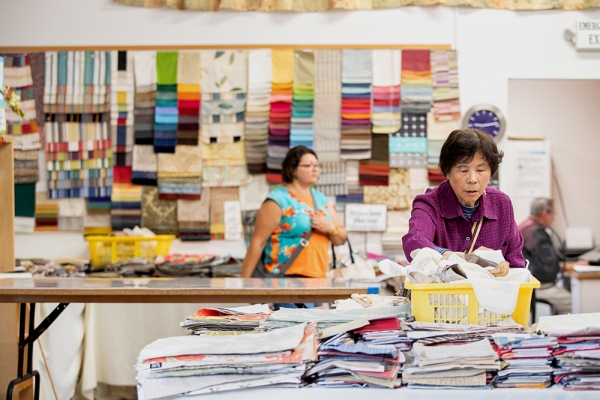 May Lin examines a pile of fabric at FabMo's montly Selection Event in September 2018. FabMo is in the process of relocating to Sunnyvale from Mountain View. Photo by Magali Gauthier. 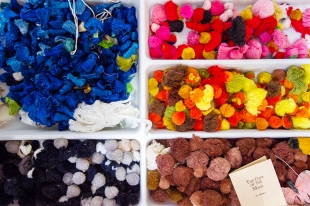 FabMo, a nonprofit that rescues discarded designer showroom samples and offers them to the public, has announced it will be moving from Mountain View to Sunnyvale after getting a significant rent hike.

Founded by a Palo Alto couple, FabMo faced a major increase in rent at its Mountain View location on Terra Bella Avenue and had a hard time finding a new warehouse location nearby, said Holly Welstein, its board chair.

"It's not just our space or Mountain View," she said. "From Facebook to Google — stuff was too expensive." In addition, she noted, the best area for FabMo – small warehouse facilities — are in decline in the area. "The kind of space we were looking for is becoming less available," she said.

Moving to Sunnyvale, though, she said, will offer slightly more square footage than the Mountain View location.

With no paid staff at the organization, Welstein said FabMo's supporters are deep in the laborious process of moving the store's inventory in order to open the Sunnyvale location to the public in mid-March.

The first public event scheduled at the new location will be a "selection event" on Friday, March 13, and and Saturday, March 14. That's when people can browse for discontinued designer fabrics, tiles, wallpapers and other items from the warehouse. FabMo accepts donations but does not charge directly for items. The organization is primarily funded through such donations, she said.

Welstein said she got connected to FabMo years ago, before it was even an organization, through a neighborhood Craigslist-like page called Freecycle, in Palo Alto.

The founders of FabMo, Hannah and Jonathan Cranch, discovered that the San Francisco Design Center would regularly fill dumpsters with "perfectly good stuff" – including many designer samples.

They learned that the materials were just going to waste, so they started picking up the materials to redistribute. Over time, the effort grew into a formal nonprofit, and today, the design center showrooms set aside donations rather than throw them into the dumpster.

Welstein said that the nonprofit, as a tenant on Terra Bella in Mountain View, has been active in weighing in on potential zoning changes the city has considered in the area, and pushed to make the point that small businesses and nonprofits were in danger of being squeezed out of the community.

"I don't fault any individual person in this process, but we've been waving the flag and making the point for a while, and I just think the financial pressures are really hard," she said.

FabMo is a Bay Area treasure, doing so much to support teachers, artists, and the community. So glad they were able to find a place, even if it is a bit further away from me.

I've been volunteering at Fabmo for years and will continue to go to their new warehouse.
It's a fantastic organization! As an artist, I love making things from all the beautiful fabrics!

In addition to fueling creativity throughout the Bay Area, FabMo diverts 70 tons of material from reaching the landfill each year.

For a small sampling of the astounding artwork and artisan products made from FabMo materials, see Web Link

Palo Alto should be fighting to attract and retain organizations like FabMo, a far greater asset to the community than yet another software firm.

These local restaurants are donating meals to Bay Area residents in need. Here's how to help.
By Elena Kadvany | 6 comments | 10,632 views

Coronavirus: Plan ahead now for a big outbreak
By Diana Diamond | 16 comments | 3,705 views

Will the Coronavirus Save Lives?
By Sherry Listgarten | 27 comments | 3,577 views