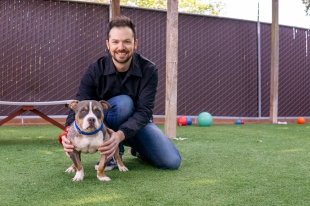 Baby, a 1-year-old bulldog-pitbull mix who was found abandoned outside of the Palo Alto Animal Shelter with grave injuries on Jan. 24, was recently adopted. Image courtesy Pets In Need.

In the latest Around Town column, news about the recent adoption of a dog who was abandoned last month, support for a permanent bathroom at Ramos Park and Britain's most headline-grabbing couple stopping by Stanford University.

WOAH BABY! ... It's been a roller coaster few weeks for Baby, a 1-year-old bulldog-pitbull mix who was abandoned outside Palo Alto's animal shelter on Jan. 24 full of deep lacerations and puncture wounds. Staff from Pets In Need, the nonprofit now managing the shelter on East Bayshore Road, rushed Baby to an emergency veterinary clinic for treatment of what employees deemed to be "grave" injuries, possibly associated with Baby being used as "bait" in a dog-fighting ring. Despite the many stitches and fluid-draining tubes, the gentle canine went through recovery in good spirits, according to staff. And on Feb. 15, Pets In Need announced in a jubilant tweet that Baby has been adopted: "Baby went home! In just a matter of weeks he went from being injured, to recovery to being adopted. We are thrilled that he now has a family to dote on him. Thank you all those who sent messages of love and support for Baby during his journey with us. Happy tails, Baby!" Palo Alto Animal Control officers are looking into who left Baby behind. Last month, Lead Animal Control Officer Cody Macartney told the Weekly that Baby's case was one of them most severe cases has seen in his 18 years with the city.

WHEN YOU GOTTA GO ... Park bathrooms may be a precious commodity for visiting families but they aren't always an easy sell in Palo Alto, where immediate neighbors have been known to oppose them on the grounds of security and cleanliness. But things appear to be different at Ramos Park, a 4.4-acre park near the intersection of Ross Road and East Meadow Drive, where a proposal to install a permanent restroom is winning supporters and gaining momentum. According to a report from Peter Jensen, the city's landscape architect, Palo Alto recently held a community meeting to discuss the park's renovation, which is set to kick off at the end of the year. Of those who attended, 21 people said they would support a park restroom, while only four said they oppose it. When asked about the potential location of the bathroom, participants generally agreed that it should be close to the East Meadow Drive (though the crowd was divided between two locations along East Meadow). An online survey issued by the city after the meeting also showed more support for having a park restroom than for not having one, though the margin was closer, with 58% favoring the facility and 42% opposing it. The installation of the bathroom would be consistent with the city's recently adopted master plan for parks, which recommends more dog parks and bathrooms. Palo Alto's capital improvement plan provides a budget of $350,000 every other year for restroom facilities at parks. In addition to building the new restroom, the city plans to replace playground equipment, benches, trash receptacles and drinking fountains at Ramos Park. The plan, which the Parks and Recreation Commission plans to discuss this Tuesday, Feb. 25, also calls for accessibility improvements and possibly a renovation of the park's large paved area, according to Jensen's report. The city plans to hold two more community meetings this spring as it finalizes the design, which would then be vetted by the Parks and Recreation Commission and then the City Council for approval this fall.

SECRET ROYAL VISIT ... Prince Harry and Meghan Markle, the Duke and Duchess of Sussex, stopped by Stanford University on Feb. 11 for a brainstorming session with professors and academic scholars to inform their work in creating a new charitable organization, according to NBC's "Today". The couple flew from Canada to the Bay Area, where they were personally greeted by university President Marc Tessier-Lavigne, a palace source told "Today." The visit is believed to be the couple's first visit to California in awhile, though it's not known whether they took their baby, 9-month-old Archie, according to British newspaper The Daily Mail.

Selfish neighbors don't want bathrooms in parks so they can keep the public parks to themselves. We live 4 blocks from the nearest city park, but we cannot walk there because there is no bathroom and having to walk home to use the bathroom is too difficult for smaller kids.

LOL Baby wasn’t likely a bait dog. I wish this silly rhetoric was retired, but PIN exploits any chance they get for PR and donations. It’s also unlikely that McCartney has seen many bait dogs in PA.

The Palo Alto city parks should also offer shower facilities in their restrooms for the homeless to bathe & do their hand washables.

It's the sign of a modern progressive city with humanistic values & perspectives.

Report Objectionable Content
Email Town Square Moderator
4 people like this
Posted by Vagrant Advocate
a resident of Midtown
on Feb 25, 2020 at 2:14 pm

Coronavirus: Plan ahead now for a big outbreak
By Diana Diamond | 16 comments | 3,701 views

Will the Coronavirus Save Lives?
By Sherry Listgarten | 27 comments | 3,568 views