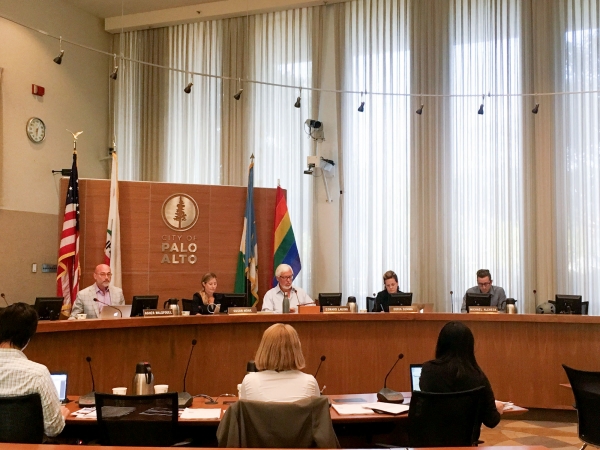 An ad hoc City Council committee has suggested the council discuss splitting the Palo Alto Planning and Transportation Commission into two boards, one focused on development projects and the other on transportation issues. Weekly file photo.

Palo Alto's long-standing system of commissions could be heading for big changes in the coming months, as the City Council weighs adding new advisory boards for seniors and sustainability, disbanding one for libraries and splitting its most influential — and controversial — commission into two.

These are some of the changes proposed by Vice Mayor Tom DuBois and Councilwoman Alison Cormack, who as a council ad hoc committee were tasked with evaluating the commissions and addressing perceived flaws in the system, including a lack of guidelines for removing commissioners. The pair released a report last week, which the City Council is set to consider this Monday, Feb. 24.

While DuBois and Cormack framed the proposed changes as "concepts" and not as recommendations, the adoption of these ideas would significantly alter a system that has been largely static for decades. The Library Advisory Commission would be disbanded, consistent with the recommendations of some of the commission's own members. And taking a cue from other cities, Palo Alto could add a Senior Commission and a Sustainability Commission, the latter of which would focus on climate and environmental initiatives.

Another proposed concept calls for turning the Planning and Transportation Commission into two commissions. This, the committee notes in the report, would align them with the city's two departments; a new Office of Transportation was recently pulled out of the Department of Planning and Community Environment.

DuBois and Cormack, who were appointed to the ad hoc committee by former Mayor Eric Filseth in December, have spent the past two months surveying current and former board members and commissioners, comparing Palo Alto's laws and procedures for commissions with those in other cities, and interviewing staff who work with commissions.

The feedback was a mixed bag. Of the 66 current and former commissioners who responded to the survey, most said they would recommend serving on a local commission (the average score on this question was 8 out of 10). But while they offered positive comments about the gratification of giving back to the community and working with staff, they also expressed concerns about the process for setting agendas, public reaction to unpopular decisions and working with other commissioners, according to the memo from DuBois and Cormack.

"Regrettably, there is concern about how a few board members and commissioners have treated staff and their colleagues over the years," the report states. "While this behavior appears to be quite rare, the ad hoc committee is concerned about the impact on our professional staff and the important work that they do with the boards and commissions."

The council agreed to take a fresh look at the commission system last December after concluding that the existing system is riddled with inconsistencies and that the city has no clear rules for removing members. Currently, different commissions have different processes for using subcommittees and varying expectations for having a council liaison attend their meetings.

The ad hoc committee recommended creating a handbook that "outlines roles and responsibilities for board members and commissioners, including expectations for professional conduct, conflicts of interest and recusals, attendance policies, how and when appointees can be removed, and roles of the staff, chair and council liaison."

The committee also recommended two types of training for new commissioners: an "onboarding training" for all commissioners that would familiarize them with the state's open-meetings law (known as the Brown Act) and offer information about how to be a "good" commissioner, and a special training for new chairs and vice chairs to help them transition into their roles.

Another recommendation is to create "annual workplans" for each commission, which the City Council would then approve. Such workplans, the ad hoc committee argued, "will improve the coordination and communication between council and boards and commissions."

The council is set to consider all of these recommendations on Feb. 24, along with the ideas of moving to a single interview period for new commissioners in the spring and of establishing term limits.

The issue of commissioner conduct has been increasingly in the public eye in recent years, with numerous residents raising concerns about the conduct of Michael Alcheck, a planning commissioner who had been in dispute with the city over rules for constructing carports and garages and who had failed to disclose his own two garage projects at the time the commission was taking up the subject.

During the council's Dec. 10 discussion, several members noted that the existing code empowers the council to remove commissioners but does not lay out a process for doing so. Cormack underscored at the time, however, that the discussion about clarifying the rules "is not about any one individual or board."

"I think it's about our responsibility as a council to provide a clear structure for all this work," Cormack said.

While the ad hoc committee was expected to conclude its work by the end of February, DuBois and Cormack are requesting in the update that they be allowed to continue to work with staff to draft the proposed documents and bring them back to the council.

I am grateful to Alison and Tom for taking this on, and it sounds like they are doing a thorough job with some sensible recommendations. Question: What is the difference between a board and a commission? (This article refers to both commission members and board members, often in the same sentence.)

9 people like this
Posted by Judith Wasserman
a resident of Leland Manor/Garland Drive
on Feb 21, 2020 at 11:51 am

In addition to rules for removing members, I would like to see more adherence to the criteria for appointing members. It appears that some boards or commissions have no requirements for qualifications, or that they are frequently ignored in the appointment process.

These local restaurants are donating meals to Bay Area residents in need. Here's how to help.
By Elena Kadvany | 6 comments | 10,631 views

Coronavirus: Plan ahead now for a big outbreak
By Diana Diamond | 16 comments | 3,705 views

Will the Coronavirus Save Lives?
By Sherry Listgarten | 27 comments | 3,575 views