Independent expenditures boost campaigns for — and against — candidates 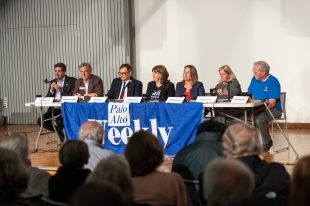 With only 12 days until California's March 3 primary, candidates running to represent District 13 in the state Senate are ramping up their campaign fundraising and spending efforts to convince voters to select them.

Democrat Shelly Masur of Burlingame raised the most in the recent campaign filing period, Jan. 19 and Feb. 15, pulling in $110,072 as of Feb. 20. Her campaign has so far raised $498,610 according to Cal-Access, the California Secretary of State's online portal for campaign finance data.

Democrat Sally Lieber of Mountain View raised $3,835 in the recent period, spending $25,750. This follows a strong period of fundraising in early January. Campaign finance records show that her contributions from Jan. 1 to Feb. 15 totaled $106,871, with $35,088 in expenditures.

Not every candidate's finance reports are available online. The latest updates for Democrat Mike Brownrigg of Burlingame, Republican Alex Glew of Los Altos and Libertarian John Webster of Mountain View were not available online by the close of business on Feb. 20. This story will be updated as that information becomes available.

However, these numbers only tell part of the story.

In just the past couple of weeks, independent political action committees have pumped hundreds of thousands of dollars into several campaigns.

Independent spending supporting Masur has also soared in recent weeks. An independent committee called Californians for Strong Schools and Healthy Communities Supporting Shelly Masur For Senate 2020, sponsored by "education and health care organizations," has raised $350,000 since the start of the new year and spent $224,706. The committee has secured funds from independent committees tied to the California Medical Association and numerous teachers associations, including the California Teachers Association.

Since Feb. 10, independent supporters of Becker have spent a total of $381,176 on behalf of his election. Most of it, $366,000, has come from the Committee for Positive Social Change Supporting Josh Becker for Senate 2020, an independent expenditure committee that received $500,000 from LinkedIn co-founder Reid Hoffman. They paid for mailers, polling and campaign consulting.

One of the committees that has been very active in the District 13 race in recent weeks is the Californians Allied for Patient Protection Independent Expenditure Account, a group tied to an attack ad in the local assembly race in 2016.

That committee has spent more than $116,562 in opposition to Lieber, while offering widespread support to other Democratic candidates in the race -- providing $15,176 each to Becker, Brownrigg, Masur and Oliva.

Independent spending on Brownrigg comes primarily from a $460,000 independent contribution from his mother. Of that, $457,400 has been spent.

Becker also recently announced that he has received an endorsement from U.S. Senator Kamala Harris, who is joining the likes of Gov. Gavin Newsom and incumbent Sen. Jerry Hill. Becker said he's known Harris for 15 years and that she's been supportive of his work with the nonprofit Full Circle Fund, particularly that organization's grantmaking efforts to address the income gap and environmental justice. He added that he's supported Harris' work regarding criminal justice reform and rehabilitation.

In a statement, Harris said, "His intelligence, passion, energy and independence will make him an extremely effective State Senator for his district and for the people of California."

District 13 stretches from South San Francisco to Sunnyvale and from north of Pacifica to Ano Nuevo State Park on the coast.

• Election Central: Watch video interviews and a debate of the candidates and read in-depth profiles and a chart comparing their views on top issues by going to this webpage.

Format of data was corrupted in transmission. Here is second attempt. Source is California Secretary of State Small parties are omitted.

Coronavirus: Plan ahead now for a big outbreak
By Diana Diamond | 16 comments | 3,699 views

Will the Coronavirus Save Lives?
By Sherry Listgarten | 27 comments | 3,564 views