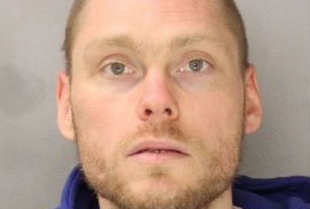 Jeremiah Porter, 33, who allegedly grabbed a woman by her neck and attempted to force her into her car in Mountain View on Feb. 17 was arrested. Image courtesy Mountain View police.

A man arrested Feb. 17 for attempted kidnapping in a Mountain View home near Palo Alto had allegedly held another woman and her daughter hostage that same evening, according to new details released by the Mountain View Police Department on Thursday.

Police said the man, identified as 33-year-old transient Jeremiah Porter, had entered a woman's home on Monroe Drive near the Palo Alto border at 9:30 p.m. on Monday, Feb. 17, and held her and her daughter hostage for roughly half an hour before leaving, according to police. The victims were reluctant to immediately report the incident because Porter had allegedly threatened to harm them if they contacted the police.

"It was only after we publicly released information about the attempted kidnapping and Porter's arrest that the victim felt safe coming forward," police said.

Police said that Porter, who is currently being held without bail in Santa Clara County Main Jail, had allegedly held the family hostage shortly before heading up the street to Montelena Court and repeatedly ringing the doorbell of another home.

When the victim, a 53-year-old woman, answered the door, Porter allegedly grabbed her by the neck and tried to force her into her car, police said. He reportedly told the victim during the attack that he needed to flee the area.

The victim was able to escape to a nearby home, and officers were unable to immediately locate the suspect.

Around 3:15 a.m. on Tuesday, police received reports of a man who was throwing rocks at windows and yelling on the 2700 block of Del Medio Court, a short distance from the Montelena Court home. A man, later identified as Porter, was found nearby standing on top of a carport, and officers used a fire department ladder to bring him down and arrest him.

Anyone who may have information on Porter's whereabouts between Feb. 14 and Feb. 17 is asked to contact Detective Matt Atkins at matthew.atkins@mountainview.gov.

I wonder he would’ve done this to men?

19 people like this
Posted by Time To raise The Bar On Certain Types Of Recurrent Crime
a resident of Leland Manor/Garland Drive
on Feb 21, 2020 at 2:14 pm

Otherwise we wouldn't have repeat offenders in these areas.

The solution...permanent incarceration where there is no access to meth, fentanyl and other illegal drugs + chemical castration (not surgical) for all sex offenders.

Posted by Time To raise The Bar On Certain Types Of Recurrent Crime, a resident of Leland Manor/Garland Drive

>> A repeat offender currently on parole.

You have a link for his previous criminal history?

Report Objectionable Content
Email Town Square Moderator
6 people like this
Posted by Time To raise The Bar On Certain Types Of Recurrent Crime
a resident of Leland Manor/Garland Drive
on Feb 21, 2020 at 3:13 pm

>>> You have a link for his previous criminal history?

In addition to this most recent incident, he was remanded to county jail for parole violation...if that's not a repeat offender then Bugs Bunny doesn't enjoy eating carrots.


Report Objectionable Content
Email Town Square Moderator
9 people like this
Posted by Clinical Researcher
a resident of Stanford
on Feb 21, 2020 at 4:17 pm

Meth is a powerful stimulant that creates a false and deluded sense of empowerment.

When combined with a dysfunctional or sociopathic sex drive, problems can and will arise, usually in the form of verbal incoherency and/or physical violence.

That is why there are so many locked up in various county jails awaiting hearings. Some are in solitary 'lockdown' as well due to the nature of their crimes.

These individuals should be separated from mainstream society & institutionalized if possible with minimal options for release as the majority will return to various forms of substance abuse whether it be alcohol, methamphetamine, PCP, fentanyl, crack cocaine and opiods.

An individual with substance abuse predispositions will usually resort to any drug based on its availability & this in turn often leads to criminal activity from which to support the addiction.

It is one thing to be a wealthy celebrity with a 'habit' as there are many rehabilitation options for them...some very expensive as well as exclusive.

For the common derelict (aka homeless) types the only alternative is to round them up & place them in care facilities where there is no access to illegal drugs.

In many instances, it should be PERMANENT with no release options.

These local restaurants are donating meals to Bay Area residents in need. Here's how to help.
By Elena Kadvany | 6 comments | 10,628 views

Coronavirus: Plan ahead now for a big outbreak
By Diana Diamond | 16 comments | 3,703 views

Will the Coronavirus Save Lives?
By Sherry Listgarten | 27 comments | 3,571 views