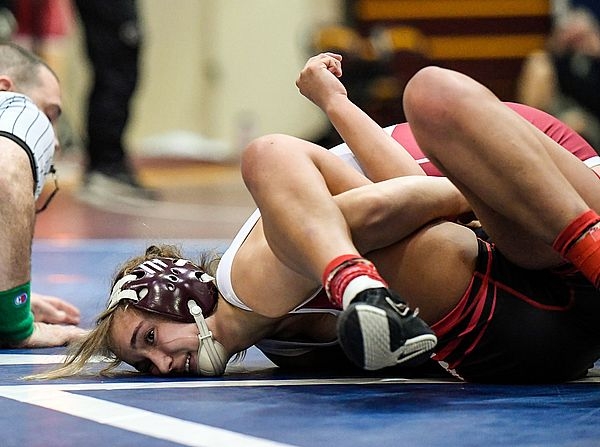 Menlo-Atherton senior Anna Smith looks to finish her career with a flourish. She's the No. 1 seed at 131. Photo by Bob Dahlberg/@bobd_photo. 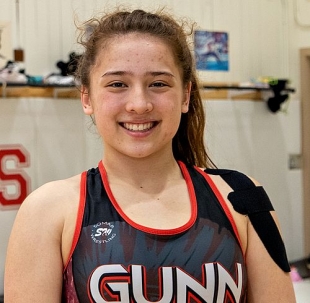 Gunn's Mikayla Silverman is the top seed at 150 for the CCS girls wrestling tournament at Indepedence High in San Jose this weekend. Photo by Butch Garcia.

Anna Smith remembers being out of control as a freshman, when she finished third at 113 pounds in the Central Coast Section girls wrestling championships. These days, her approach to meets are much more cerebral, far more calculating and a lot more fun.

Now a senior, Smith wants to finish her decorated career at Menlo-Atherton with a flourish by placing at the state meet.

To qualify for state, Smith has to do well this weekend at the CCS championships in San Jose and that's where her focus lies.

"I'm much calmer and under control," Smith said after winning the Peninsula Athletic League title at 131 pounds last weekend. "As a freshman I was scrappy and out of control. I wasn't sure I knew what I was doing."

Smith is the top seed at 131 pounds, where she placed second last year. Smith won the CCS title at 116 as a sophomore.

Palo Alto and Gunn each has a wrestler seeded first in their division: Gunn's Mikayla Silverman tops the list at 150 and Paly's Ella Jauregui is seeded first at 121.

Silverman won a round-robin tournament to earn a SCVAL title. Jauregui won her title by beating a wrestler she had lost to on three other occasions.

On Saturday, nine mats will be used for the boys and girls session at 10 a.m. Finals will feature one mat for boys, one for girls and run concurrently beginning at 7 p.m.

Menlo-Atherton is the three-time defending CCS champion and will bring a full complement into the weekend's proceedings.

M-A has six other wrestlers seeded among the top six, including junior Hanna Hendrickson (170) and freshman Kiely Tabaldo (101), who are seeded second.

Sophomore Alexia Bensoussan (121), Alex Lujan (150), Isabella Episendio (189) are seeded fifth and Alejha Broussard is seeded sixth at 111. Zoe Zehnder is an alternate at 137.

Paly's Alexandra Lee was bumped up a weight class and is seeded sixth at 131 pounds. Paly's Amelia Clough is seeded third at 189 and Zoe Wong-Van Haren is an alternate at 116.

Woodside's Hali Newman at 152 and Alison Richter at 162 also qualified for the CCS tournament.

Palo Alto's Adar Schwarzbach is the top seed at 145 pounds for the Central Coast Section championships.

Palo Alto has a good chance to finish among the top five at CCS, which gets underway Friday at 10 a.m. (the girls first session is 6 p.m.) at Independence High in San Jose, thanks to Schwarzbach, Dara Haydarpour (seeded third at 152), Cade Creighton (No. 2 seed at 160) and Halo Lynch (No. 5 at 170).

Creighton pinned his opponent in the third period and Ferrell, just returning from injury, recorded a first-period pin.

Ferrell made his season debut against Wilcox on January 30. He's been working on his stamina over the past two weeks and was able to avenge a loss during the dual meet season en route to winning his title.

Gunn's Calvin Cai, who reached the SCVAL championship match, is seeded third at 145 pounds. His only loss was to Schwarzbach.

Will the Coronavirus Save Lives?
By Sherry Listgarten | 27 comments | 3,564 views