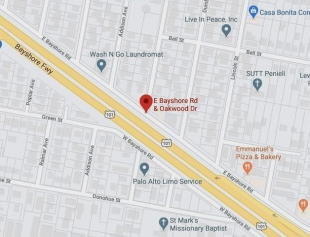 A 52-year-old man was struck and killed by a car in the area of East Bayshore Road and Oakwood Drive in East Palo Alto on Feb. 14. Image courtesy Google Maps.

A man died in collision with a car in an East Palo Alto neighborhood just north of U.S. Highway 101 on Friday night, police said in a community update issued Wednesday.

Officers responded to a reported collision between a car and a pedestrian shortly before 9:10 p.m. at Oakwood Drive and East Bayshore Road, about four blocks away from University Avenue, police said.

The pedestrian died from their injuries, according to police. The driver stayed at the scene and cooperated with officers.

The police department is investigating the collision with help from the South County Major Accident Investigations Team, made up of police officers from East Palo Alto, Menlo Park and Atherton. Anyone who witnessed the incident is asked to call East Palo Alto police Cmdr. Mike Stasko at 650-853-3145.

Can you stay healthy without making more trash?
By Sherry Listgarten | 7 comments | 3,248 views

Think about helping others in our coronavirus-affected area
By Diana Diamond | 7 comments | 2,953 views

The University of California’s flexible policies during COVID-19
By John Raftrey and Lori McCormick | 6 comments | 1,543 views