Police arrest two for series of auto burglaries, find handgun in their car 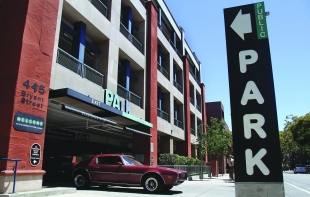 Two men who allegedly burglarized 10 cars in Palo Alto were arrested after a woman whose vehicle was nearly broken into by one of the men at a downtown parking garage at 445 Bryant St. notified police. Weekly file photo.

Two men allegedly linked to 10 car burglaries in Palo Alto were arrested after a woman alerted authorities that they were breaking into her car at a downtown parking garage, Palo Alto police said Wednesday.

On Saturday around 1:50 p.m., a woman in her 30s was sitting in her car on the fourth floor of the city parking garage at 455 Bryant St. where a man approached her on the driver's side and hit the window with a flashlight, allegedly in an attempt to burglarize the car, according to a police press release. When the man saw the woman, he walked away.

The woman stepped out of her car and watched the alleged burglar and a second man walk down the stairwell to the garage's third floor. As she called 911, she heard the sound of glass breaking and she said she saw the man who had approached her peer into other car windows, according to police.

When officers arrived at the scene, they saw two men matching the woman's descriptions of the alleged burglars in the 400 block of Florence Street, a block away from the parking garage. One man surrendered and the other ran north. Officers tackled the fleeing man after a short foot pursuit near the intersection of Florence and Lytton Avenue and arrested him.

He suffered a laceration to the back of his head and the inside of his mouth when he was apprehended, police said. Palo Alto Fire Department paramedics treated him at the scene and transported him to a hospital where he was treated for minor injuries. Police then booked him into Santa Clara County jail in San Jose after his release from the hospital the following day.

Officers located several more cars in the parking garage with smashed windows. They also located a vehicle associated with the men at Lytton and Florence, where they found a loaded .40-caliber handgun, a high-capacity ammunition magazine, prescription drugs and stolen property, including electronics, purses and wallets, police said.

The stolen property is connected to 10 different auto burglaries in Palo Alto, the press release states. Three of the burglaries occurred on Saturday and the other seven happened prior to Saturday, police said. Detectives are investigating whether the men are linked to more cases in the city.

Both men are on active probation in San Francisco for weapons charges. Police also booked the 20-year-old man for resisting arrest, which is considered a misdemeanor.

Anyone with information about the car burglaries is asked to call the department's 24-hour dispatch center at 650-329-2413. Anonymous tips can be emailed to paloalto@tipnow.org or sent by text message or voicemail to 650-383-8984. Tips can also be submitted anonymously through the police's free mobile app, downloadable at bit.ly/PAPD-AppStore or bit.ly/PAPD-GooglePlay.

Editor's note: Palo Alto Online's policy is to withhold the names of those arrested for most crimes until the District Attorney has determined there is sufficient evidence to file charges in the case. See our guidelines here.

However, “ Both men are on active probation in San Francisco for weapons charges.” No thank you, California legislators and courts.

Yet again, this is a sign of our politically-correct, lax elected and appointed politicians. It’s a risky, damaging approach to operating a society.
Look at San Francisco: we are heading towards being like that dreadful city. Criminals and drug addicts coddled every which way. Instead, legal residents need to take priority, civilized society, those contributing to society, public health, public safety all need to take priority.
I support law enforcement and prosecution. If it takes “building more jails and prisons,” so be it. The alternative of a free-for-all for criminals, freeloaders and drug addicts doesn’t seem to be working out too well. “Oh, let’s encourage them to clean up and dispose of the free needles we supply them..” - How’s that working out in S.F.?
It’s awful to be a crime victim, incidentally....

They'd get more leniency here if they took Caltrain down from S.F. instead of driving.

One of these days, after people keep leaving valuable items in view, I wonder if police will charge to respond--the way rescue crews have charged people for the searches to find them when they get lost.

Report Objectionable Content
Email Town Square Moderator
14 people like this
Posted by Dan
a resident of Professorville
on Feb 20, 2020 at 8:38 am

Great job PAPD!!!
To the reporter - Sue can you please follow up on this story to track what happens to these criminals? Will they go to jail? For how long? Will they get released awaiting trial or stay locked up? How about interviewing them to get their point of view - why do they risk going on a crime spree in Palo Alto when they are already on probation?

These local restaurants are donating meals to Bay Area residents in need. Here's how to help.
By Elena Kadvany | 6 comments | 11,167 views

Coronavirus: Plan ahead now for a big outbreak
By Diana Diamond | 19 comments | 4,193 views

Will the Coronavirus Save Lives?
By Sherry Listgarten | 29 comments | 3,944 views

The first few seconds after awakening; before I remember the virus
By Chandrama Anderson | 0 comments | 1,044 views