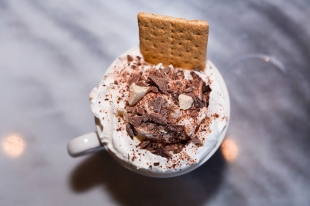 In the latest Shop Talk column, read about the closure of one of the area's last toy stores, a new chocolate shop and the end of a longtime boutique.

AMBASSADOR TOYS CALLS IT QUITS ... For more than a decade, Ambassador Toys at Town & Country Village in Palo Alto has been a destination for just about anyone looking for retro games, books, puppets, crafts and toys for babies through middle schoolers. It's among the last of the toy stores left in the area, and now it's leaving, too. The owner is apparently retiring, according to a giant yellow sign posted in the window last week, which reads: "Retiring. Store closing. Everything on sale." An employee at the shop said he did not know when the store's last day will be and declined to comment further. The Palo Alto store is not the only Ambassador site set to shutter. According to Hoodline.com, two San Francisco shops are closing. Owner Linda Kapnick, who could not be reached for comment, founded Ambassador Toys in San Francisco in 1997. She opened the Palo Alto site in 2008. During its 12 years at Town & Country Village, the shop was voted "Best Toy Store" or runner up multiple times by Weekly readers during the newspaper's annual Best Of edition. Ambassador Toys is the third notable toy store to close its doors in Palo Alto in the past four years. Educational toy store Gray Matters on California Avenue closed in 2019, and longtime toy store Palo Alto Sport Shop and Toy World closed in 2017 after operating downtown for 87 years. -- L.T.

CHOCOLATE COMPANY COMING ... Cacao 70, a Montreal-born chocolate company, is opening its second U.S. location at Town & Country Village this spring. Cacao 70 has taken over the former Biondivino wine shop space in the back of the 855 El Camino Real shopping center. Cacao 70 was born as a chocolate drinking bar in downtown Montreal in 2011. There are now franchised locations throughout Canada and spinoff concepts, including a public chocolate factory, a full-service restaurant and an ice cream counter. The Palo Alto Cacao 70 is a franchise. "Cacao 70's quest to transform chocolate into exciting flavor adventures has led down the path of cocoa bean sourcing, product development and new store concepts -- all tracing back to the first store opening in Montreal nine years ago," said Mila Zhu, who works in the company's California office. The Palo Alto shop will serve hot chocolate, chocolate frappes, milkshakes, waffles, crepes, other desserts and all-day brunch dishes, she said. Other locations' menus include over-the-top waffles (one is topped with sugar, graham crackers, fruit and chocolate-covered ice cream and served with dark-chocolate dipping fondue and marshmallows), chocolate pizzas, Nutella crepes and chocolate fondue, among other desserts. -- E.K.

LONGTIME BOUTIQUE CLOSES ... Berkeley-based boutique Bryn Walker reportedly closed its doors at 212 Homer Ave. on Sunday, Feb. 2, according to a sign posted in the window. The women's boutique, which has eight other company-owned stores and sells to nearly 1,000 boutiques throughout the country, had operated in Palo Alto for 22 years. The company reportedly plans to make its items available online. The shop first opened at 515 Cowper St., where it operated for 17 years before the building was scheduled to be demolished to make way for a three-story office complex in 2016, forcing the boutique to relocate to the historic Thompson's Bakery site on Homer Avenue. At the time of the shop's relocation, store manager Diane Kelley told the Weekly: "I just hope they won't be tearing that building down too!" -- L.T.

Compiled by the Weekly staff; this week written by Elena Kadvany and Linda Taaffe. Got leads on interesting and news-worthy retail developments? The Weekly will check them out. Email shoptalk@paweekly.com.

5 people like this
Posted by Justin Bacchus
a resident of Another Palo Alto neighborhood
on Feb 10, 2020 at 8:42 pm

There is something kind of grotesque about the fact that the only kind of retail that seems to be able to make it in Palo Alto involves people cramming something or other into their pie hole.

More additions to the ever-growing list of victims of the new retail reality. Sad.

Report Objectionable Content
Email Town Square Moderator
3 people like this
Posted by Julie armitano
a resident of University South
on Feb 12, 2020 at 12:24 pm

it is sad.
I am happy for the chocolate shop

The University of California’s flexible policies during COVID-19
By John Raftrey and Lori McCormick | 6 comments | 1,537 views