Around Town: What's keeping the new Fire Station 3 behind schedule? 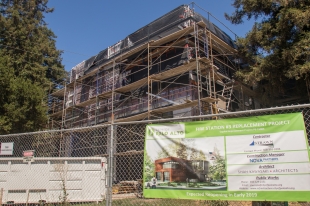 The new fire station at Embarcadero Road and Newell Road is still under construction in this July 2019 photo. The project was originally planned to be completed earlier that year. Photo by Veronica Weber.

In the latest Around Town column, news about lagging construction for Fire Station 3, the Stanford School of Medicine taking over Theranos' old offices and a late architect of Palo Alto parks telling his story in a new oral history.

ALMOST THERE ... It took far more time and money than anyone had anticipated, but the construction of the Fire Station 3, near Rinconada Park, is finally nearing completion. Initially slated to be completed in early 2019, the project has fallen behind significantly schedule — a delay that city officials attribute largely to the hot construction market. City officials pointed to the revolving door of subcontractors and project managers who have worked on the project and then went on to take jobs elsewhere, requiring the city to scramble for replacements. City Manager Ed Shikada told the council this week that the project "certainly demonstrates some of the vulnerabilities of the construction industry that we're currently experiencing in the Bay Area." Even so, he noted that the fire station is almost ready. "We're looking forward to ribbon-cutting within the next month or so," Shikada said. The delays have come at a cost. The council has already approved several contract amendments with the project architect, Shah Kawasaki Architects, for design services. This Monday, council members plan to add another $102,141 to the architecture contract, raising total compensation to $916,383. The city also hopes to get some of that funding back. A new report from Public Works Department notes that the city's contract with the project contractor allows the city to assess liquidated damages of $1,500 per day, which intends to cover all costs associated with the delay. Once it's completed, Public Works will set its sights on the next project: Fire Station 4, at Mitchell Park.

NEW BLOOD ... As fallen Theranos CEO Elizabeth Holmes continues to defend herself against charges of fraud related to the startup's blood-testing devices, a well-known tenant is remodeling the Palo Alto headquarters her company once occupied. The Stanford School of Medicine is now leasing the property at 1701 Page Mill Road in Stanford Research Park. Freelance journalist Corinne Purtill captured the changes underway in a Jan. 23 article for One Zero, online platform Medium's tech and science publication. A visit last October to the headquarters showed the building interior resembling footage captured in "The Inventor: Out for Blood in Silicon Valley," an HBO documentary on the company and its demise released earlier last year. "The giant, circular brass sink tables were still there, their flashy modern design contrasting awkwardly with the new rows of standard-issue cubicle desks nearby," Purtill wrote. During another walk-through of the building in early January, renderings placed on an easel near the main entrance showed "an attractive but generic future interior," she said. "Already the tenure of Silicon Valley's most famous fraud is little more than a footnote, its former space repurposed for new work, new innovation, new potential next-big-things."

BUILDING A LEGACY ... The voice of late architect Robert Royston, the original designer of Mitchell and Bowden parks, lives on in a new video oral history released on Jan. 10 by The Cultural Landscape Foundation. In the 43-minute recording, Royston gives the backstory to his involvement with Mitchell Park, which began with a phone call from the project's chief engineer who asked if he could use lots of earth. "I'll take all you've got," he said. He went on to design a park for the flat site that used mounds as part of its structure. "Palo Alto, being flat, all of a sudden, the kids had something to roll down. It was very interesting." He also gave his original vision for Bowden Park, the small 2-acre site in the California Avenue business district. "My thought was to make it available and visible from the train (station) and yet to be so articulated that it would work with the neighborhood and the children's play area, and just open space," Royston said. "What you see today is pretty much what was designed, except in the end that I had focused on the big, beautiful oak tree (that) was removed to put in an underpass."

Never understood how Stanford can build many new buildings under budget and on time, but the city of PA can’t. Just two NEW buildings (Mitchell Park library & Station 3) in the last 30 YEARS and both have been way over budget and not even close to on time. What a mess!

Like this comment
Posted by free enterprise
a resident of Another Palo Alto neighborhood
on Feb 1, 2020 at 3:42 pm

Stanford is private money. Any idea how many NEW houses have been built in Palo Alto with private money in the past 30 years? Must be a thousand or more. ("NEW" meaning completely replaced, like the Mitchell Library or Fire Station 3.)

Report Objectionable Content
Email Town Square Moderator
15 people like this
Posted by CrescentParkAnon.
a resident of Crescent Park
on Feb 1, 2020 at 8:00 pm

It would just not be a City of Palo Alto project if there were not significant delays and cost-overruns, now would it.


Report Objectionable Content
Email Town Square Moderator
2 people like this
Posted by Nick
a resident of Stanford
on Feb 1, 2020 at 11:38 pm

Report Objectionable Content
Email Town Square Moderator
2 people like this
Posted by free enterprise
a resident of Another Palo Alto neighborhood
on Feb 2, 2020 at 1:41 am

@Nick, I think they are competing for the same labor and the same materials and the same equipment and zoning and permitting agencies. Maybe the difference is the funding source attaching more urgency to getting it done. For the several new office buildings and hotels around here, TIME is MONEY. For the city, not so much. Does a new library or fire station generate income?

Report Objectionable Content
Email Town Square Moderator
5 people like this
Posted by commonsense
a resident of Professorville
on Feb 2, 2020 at 8:54 pm

900 K in Arcitectural Fees is absolutely ridiculous !
DO NOT give Shah Kawasaki another project. And why bill the contractor for delays that were most likely beyond and out of their control. When will the city learn they are not qualified to evaluate the restraints and challenges of commercial construction ?
Nick as far as Stanford is concerned the answer is Arrillaga...

Report Objectionable Content
Email Town Square Moderator
5 people like this
Posted by Green Gables
a resident of Duveneck/St. Francis
on Feb 4, 2020 at 11:10 am

In the State of California, government projects have to take the lowest bid for construction. That law is really stupid. There are project changes which up the costs of construction involved.

Report Objectionable Content
Email Town Square Moderator
2 people like this
Posted by Anon
a resident of Another Palo Alto neighborhood
on Feb 4, 2020 at 11:21 am

In order to fix this, we need to understand the problem:

It is the Public Contract Code, A State Law, that causes all the delays and claims on public projects. Repeal the Code and the situation will change. The Code hamstrings the public agencies and the contractors take advantage of it

Report Objectionable Content
Email Town Square Moderator
2 people like this
Posted by He Must Go
a resident of Old Palo Alto
on Feb 6, 2020 at 5:51 pm

Do Not Believe that BS about competing for the same labor. How do so many other buildings get completed throughout our city. Here’s the common denominator George Hoyt the Building Official for our city. He was in charge of the Mitchell Park Library & this Fire Station. He is the worst manager of people that has been in that position just the shear turnover under him is scary all that money the city invests in it’s employee’s just to walk out the door after they have had enough of this micro manager who’s not focused on development but instead converting city staff to contract staff to “4 Leaf” who he worked for previously and guess who’s in control of that contract George Hoyt conflict of interest. You think.

The University of California’s flexible policies during COVID-19
By John Raftrey and Lori McCormick | 6 comments | 1,537 views