Man tackles teen who allegedly stole his phone, gets punched in the face 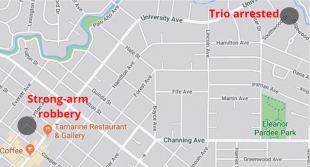 Three 15-year-old boys who allegedly took a cellphone from a man on Lytton Avenue near Tasso Street were arrested about a mile and a half away on Edgewood Drive in Palo Alto on Jan. 28. Image courtesy Google Maps.

25 people like this
Posted by Resident
a resident of Another Palo Alto neighborhood
on Jan 28, 2020 at 6:14 pm

Thank you to the PAPD for catching these teens so quickly. I hope the man recovers quickly.

The really awful, sad, thing about this is that 3 15 year olds did this. 15 year olds are little more than children. 15 year olds who think that it is OK to grab something that doesn't belong to them and to punch the person trying to defend his property. 15 year olds who do not know the difference between right and wrong.

What is happening that some are growing up to believe that they can do this? How are we failing our young people? How can we do a better job of mentoring young people? What are the parents teaching these kids? Where are the fathers? How can we turn this mindset around? These teens are going to be released to their parents. Can the parents be trusted to teach these kids what they have done is wrong and not to do it again?

12:30 on a Tuesday this crime happened. Don’t these 15 years old attend school?

Report Objectionable Content
Email Town Square Moderator
5 people like this
Posted by Anonymous
a resident of Duveneck/St. Francis
on Jan 28, 2020 at 9:50 pm

I thought the same thing, but maybe they have an open campus. I oppose open high school campuses.

Report Objectionable Content
Email Town Square Moderator
5 people like this
Posted by Trigz
a resident of East Palo Alto
on Jan 28, 2020 at 9:59 pm

Report Objectionable Content
Email Town Square Moderator
8 people like this
Posted by Nyorket
a resident of Charleston Meadows
on Jan 28, 2020 at 10:06 pm

Report Objectionable Content
Email Town Square Moderator
2 people like this
Posted by Lazlo
a resident of Downtown North
on Jan 29, 2020 at 10:29 am

Report Objectionable Content
Email Town Square Moderator
2 people like this
Posted by Lazlo
a resident of Downtown North
on Jan 29, 2020 at 10:33 am