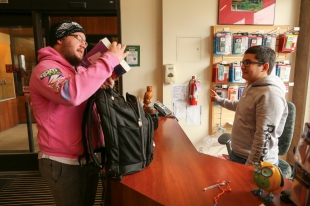 Shane Stephens, left, asks a question of student employee Aibol Kubayev at Foothill College's bookshop on Jan. 21. Student employees, who make the state minimum wage of $13 an hour, may soon be getting a pay bump on par with local minimum wage laws. Photo by Sammy Dallal.

For the more than 1,000 student employees working campus jobs across the Foothill-De Anza Community College District, getting paid the local minimum wage would be a big improvement. But as it stands, many students are scraping by with less.

At a district board meeting in November, De Anza student Kylie Jeong said that her job in dining services paid only $12 an hour — well below the minimum wage in neighboring cities like Cupertino, Los Altos, Mountain View and Palo Alto.

She said she didn't know how it was legal for the district to make an end-run around these local laws, but that it certainly wasn't fair — particularly for those on student visas who are barred from taking a job elsewhere. She said it felt like she was being treated like cheap outsourced labor.

"We live here and we work here because we have no other options," she said. "International students like me can't get a job outside of school."

De Anza College in Cupertino is not required to abide by the city of Cupertino's $15.35 minimum wage. Foothill College would not be required to follow a wage ordinance imposed by Los Altos Hills, if the town ever passes one. College campuses across California are instead subject to the state's minimum wage, which was $12 an hour last year and $13 starting this month. Even those wages can be further be reduced to $11.05 under certain circumstances.

The low wages fall well short of what it takes to afford housing in the area — average monthly rent now exceeds $2,800 across most Santa Clara County cities — and student advocacy groups say homelessness and food insecurity are growing problems across the college district.

Immunity to local ordinances means wages among the student workforce have lagged behind the regional push for a living wage, but that could change as soon as this year. Citing the high housing costs and the importance of having on-campus jobs that pay decent wages, Foothill-De Anza trustees agreed at a board meeting earlier this month that it's time to bring the minimum wage of all of its staff to $15 an hour, including student employees, classified and temporary staff.

Board member Gilbert Wong said the district should strive to be ahead of the rest of California and not trail behind neighboring cities, advocating for bringing the district's hourly wage to $15 and adjusting it for future cost-of-living increases. Board member Peter Landsberger questioned the appeal of working a $13-an-hour job at school when students can go down the street and make more working at Target.

Board member Patrick Ahrens said he remembered working at De Anza and being paid $13 an hour more than 10 years ago, which he said was an important income that paid for food and books. He advocated for finding a way to increase the student employee minimum wage to $15 an hour this year, potentially starting with a more immediate-term boost to $14 an hour, adding that on-campus jobs can help keep students focused on schoolwork.

"These positions on campus are really transformative and they provide an excellent avenue for our students to stay focused on their academic education rather than getting a job off campus," he said.

Perhaps the largest beneficiaries will be international students attending Foothill and De Anza, who are subject to several employment restrictions and may not have the luxury of being able to take a job anywhere else. Students with academic visas can't work off campus during their first year, and they can't work more than 20 hours per week. One international student told trustees that he tries to work as much as possible, but 19-hour weeks at $12 an hour isn't enough to pay for high tuition and other bills. The $15 minimum wage bump, by his estimate, would add an extra $250 to his monthly pay — enough to offset the cost of food.

How the district will be able to pay for the increased costs is still an open question, given its gloomy budget forecast and recent decline in enrollment. The latest head count shows that 254 student employees worked at Foothill College and 802 students worked at De Anza over the course of 2019, according to a district staff report, and paying them all a baseline $15 an hour would increase costs by nearly $500,000.

District officials say that the board can offset the pay bump by increasing prices at bookstores and campus dining services or simply slashing positions. Staying revenue-neutral would mean eliminating 45 positions at Foothill and 138 at De Anza.

Ahrens said he is uneasy about the trade-offs, and said district staff should try to find some way to cobble together funds to pay for the increased wages without cutting jobs or passing the costs onto students.

Chancellor Judy Miner said staff would come back with an update next month with more data, particularly whether job reductions would inadvertently force international students who need the work out of the district. She said a minimum wage increase could also be retroactive to the start of 2020.

Think about helping others in our coronavirus-affected area
By Diana Diamond | 7 comments | 2,949 views

The University of California’s flexible policies during COVID-19
By John Raftrey and Lori McCormick | 6 comments | 1,536 views