But does new Palo Alto pilot program create too many obstacles to succeed? 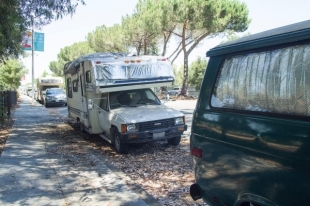 More recreational vehicles have appeared along El Camino Real and other major streets in Palo Alto, where the city will test a "safe parking" program approved Jan. 13 for people living in their cars. File photo by Ben Hacker.

2 people like this
Posted by Resident
a resident of Another Palo Alto neighborhood
on Jan 17, 2020 at 9:21 am

This article portrays what many people think that these are "unused" parking lots at churches and temples. Obviously I can't speak for all of them, but certainly many are not "unused", just vacant at night.

These parking lots are necessary not only for say Sunday mornings (or whenever the regular meetings take place which can also be for midweek youth activities, choir practices, etc.) but area also used ad hoc for memorial services, weddings and other times when the church has a large meeting(s).

I would like to know how the places of worship will manage to have evening functions in their facilities while having others sleeping on their premises. Perhaps since some already have homeless people sleeping their for weeks at a time it is just a non-issue. If that is the case, then please tell us, the community, that is the case.

For me this article demonstrated the hypocrisy of our "growth" majority. They spout off on a regular basis about the need for more housing. But they are unwilling to vote for a more robust solution to getting some of the vehicle dwellers into safe parking areas. Clearly they are interested in housing that benefits people with higher incomes; i.e., tech bros and developers.

ALL councilmembers voted unanimously for this proposal. Your accusation of hyposcrisy is a fiction. Tanaka and Filseth have both expressed hostile attitudes toward vehicle dwellers in past statements, but both voted for this proposal. There is not a slow-growth/pro-housing divide here. In fact, CM Cormack moved to eliminate study of vehicle dwelling bans as originally posed by Dubois/Kou, making this safe parking proposal about safe parking instead of combining it with punishing vehicle dwellers who aren't among the lucky few to get safe parking spots.

The real hypocrisy comes from the anti-housing folks, whose stances cause homelessness and displacement. Killing Maybell has consequences. 60 low income seniors will go unhoused because of their actions. Safe parking is good, but its a disgrace that so many people are forced into such dire living conditions. Truly shameful that this region can't agree we have a duty to add more neighbors to every neighborhood. Residentialists care more about their parking spots than human beings--the result is people living in our treasured parking spots.

Report Objectionable Content
Email Town Square Moderator
5 people like this
Posted by Resident
a resident of Another Palo Alto neighborhood
on Jan 17, 2020 at 12:39 pm

Too many naive people like @Nov aren’t paying attention, and have it backwards.

Kou and DuBois are the real advocates for the disadvantaged. They have consistently been supporters of the homeless, low-income and renters, but ambivalent about high-income Google-types.

Whereas the so-called “housing advocates” Fine, Kniss and Tanaka are exactly the opposite: supporters of the privileged, but ambivalent about low-income people. They feel the pain of the latter, but always act and vote for the former, whether it’s shooting down renter protections, eliminating office caps, opposing impact fees for low-income housing, or watering down the Safe Parking proposal in Policy and Services as Kniss did.

Kniss because she is tight with developers who just want upzoning and rich tenants. Fine who is also funded by developers but is mostly a true believer in the urban utopia dream for well-paid creatives. And Tanaka who thinks free markets will solve everything.

Report Objectionable Content
Email Town Square Moderator
4 people like this
Posted by @Novelera
a resident of Adobe-Meadow
on Jan 17, 2020 at 2:57 pm

I will never get over Maybell. Soon, the houses that were built instead of affordable housing will be for sale. You know how many low-income people will get to live there? 0!

60 low-income seniors are homeless as a result of actions members of this "community" took and it will be a stain on this community for as long as there are people here to remember it.

Being "ambivalent" about high income tenants is extremely problematic. We have a ton of high income jobs in Palo Alto. Saying "we don't want those rich techies here" doesn't make them disappear. It bids up the price for the scarce housing we have and displaces lower income people. And saying that we just need to make the jobs go away is bonkers because the #1 reason for homelessness is job loss! Think about when you were working (assuming you're retired b/c most of the PASZ folks are) how painful it would be for your family to have your job moved or eliminated.

Platitudes and empty gestures don't matter. Actions do. If you take action to stop housing, you don't care about renters and low-income people. You've demonstrated this with your actions. The people responsible for killing Maybell, Bill Johnson included, should apologize if they'd like to earn a reputation as progressive. Otherwise, don't claim to be for equity whilst sitting in your $2.5million dollar home in a neighborhood that only multimillionaires can move into. It's nonsense.

Flying: How to lower your impact
By Sherry Listgarten | 20 comments | 3,454 views

My angst about the disaster of these two debates
By Diana Diamond | 34 comments | 2,022 views