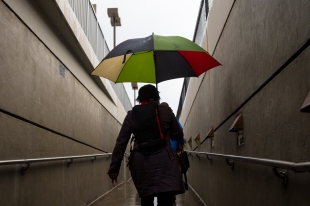 A Caltrain commuter exits the California Avenue station in the rain. Wet weather is expected on Jan. 9, followed by cool and dry conditions the next day. Weekly file photo by Veronica Weber.

Bay Area commuters can expect rain and gusty winds Thursday morning as a cold front moves through the region, according to the National Weather Service.

No more than a quarter of an inch is expected on average in lower elevations, while the coastal hills are forecast to get an average of a half an inch. Rain was expected to end at about noon, followed by wind and cool temperatures, weather forecasters said.

Thursday night and Friday morning are forecast to be cold and clear with lows in the 30s for many areas except for the cities, which are expected to drop into the 40s.

Friday will be cool and dry, but residents can expect the king tides to arrive in the morning. The tides, along with wind and light rain, will bring nuisance flooding Saturday morning around San Francisco Bay and the coast.

Weather forecasters expect the rain to end Saturday morning and the rest of the weekend to be dry, but cool. More light rain may impact the region early next week.