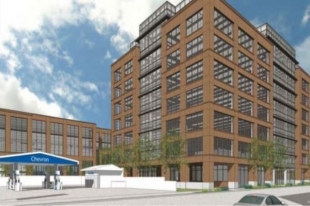 As a resident of another city, I applaud the project. The more office space that is built along University, the harder it will be to get to Palo Alto and Menlo Park via US-101 and CA-84/Dumbarton Bridge. If you like to watch the Warriors, just think of EPA "blocking out" traffic towards the west and south.

Of course, if I were a resident of EPA, I would not be happy about the increased traffic. Shouldn't new office space developments have accompanying housing? What does this do to the jobs/housing imbalance? Don't we need more kids for the schools? When is that rebuilt railroad right-of-way going to be done that was promised 30 years ago or whatever?

But hey. I don't live there. I don't even live in San Mateo County. They can do whatever they want up there and don't need my advice.

Sorry East Palo Alto, too little, too late. Your rich neighbors to the West have already oversold their land to developers leaving you little room to make your own town miserable with underparking, unreasonable amounts of office space, and pointless bicycle "improvements". Better luck during the next bubble.

Report Objectionable Content
Email Town Square Moderator
7 people like this
Posted by Jose
a resident of East Palo Alto
on Dec 9, 2019 at 2:43 pm

PLEASE, Please get rid of that Chevron gas station on the corner! Gas cars will be obsolete in 10 years anyway, Please! One idea would be to move it perpendicular, across by the Amazon building in the empty lot, that lot has been empty for nearly a decade - I thought the mortuary was moving, what about there?! PLEAAAAAAAASE!

EPA has more people than jobs (unlike Palo Alto, which has far more jobs than people). Seems like a wise move to build an office building there, although retail would probably create a broader spectrum of opportunities for those who really need them.

Report Objectionable Content
Email Town Square Moderator
1 person likes this
Posted by Steve Riley
a resident of Mayfield
on Dec 17, 2019 at 5:13 am

I was camping last weekend with family. Had a great time. Thanks