The con is on 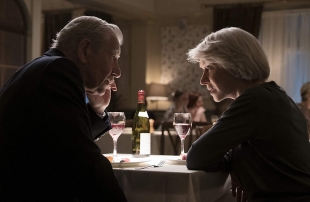 At one point in the new thriller "The Good Liar," a character sees a pond and remarks, with a slight, smug smile, "Be careful. It's deeper than it looks." The line is meant as a commentary on character and also a literary self congratulation. And that would be all well and good if the film had a well-crafted plot with fascinating characters and surprising twists. Instead, it has Helen Mirren and Ian McKellen, and for those of us who'd watch them read the phone book, "The Good Liar" comes uncomfortably close.

I'm being hard on "The Good Liar" because its pedigree promises more than the film can deliver. Along with its storied stars, Oscar-winner Bill Condon (director of "Kinsey," "Dreamgirls" and "Gods and Monsters," which starred McKellen) directs a script by playwright and screenwriter Jeffrey Hatcher ("Stage Beauty" and the McKellen-Condon collaboration "Mr. Holmes"). Unfortunately, the Nicholas Searle novel Hatcher adapts features a shopworn story with easily anticipated plot twists, resulting in a soggy and largely pointless exercise that gets by on its consummate cast and some witty dialogue.

The first signal that we're in for shenanigans comes from the setting: 2009 London. Condon gets off to an amusing start as Roy Courtnay (McKellen) and Betty McLeish (Mirren) white-lie to each other on a dating website, followed by an ostensibly charming first date that cashes in on the film's star power. We're immediately privy to Roy's true nature as a con artist. Working with his partner Vincent (Jim Carter of "Downton Abbey"), Roy takes easy-mark investors to the cleaners with shady schemes. Working over widows like Betty amounts to a side hustle for Roy, although a potentially lucrative one.

Betty presents as a near-perfect patsy. She's wealthy, with a medical condition guaranteed to shorten her life and a weakness for Roy's charms and false humility. There's just one thing: her wary son Steven (Russell Tovey of "Looking"), who refuses to trust Roy and deplores how quickly his mother lets the stranger into her life. By faking a bum knee, Roy swiftly scores an invite to live in Betty's spare room, and before long, he's insinuated himself as her life partner, joining bank accounts in an offshore investment scheme abetted by Vincent and accompanying her on a holiday to Berlin.

"The Good Liar" proves watchable mostly for McKellen, who relishes the role with the most opportunities to play. Mirren's reliably good, but she must bide her time along with the plot, until the tickety-boom detonation of the film's implausible rug-puller. In the end, the story's self-described "depth" amounts to pulp paperback hooey that pays mere lip service to actual depths of psychology and emotion, but Condon's film at least includes exactly what it says on the tin: lots of McKellen and Mirren, two legends sharing the screen together for the first time.

Coronavirus: Plan ahead now for a big outbreak
By Diana Diamond | 22 comments | 4,705 views

The first few seconds after awakening; before I remember the virus
By Chandrama Anderson | 0 comments | 1,944 views

Can you Stay Healthy without Making More Trash?
By Sherry Listgarten | 2 comments | 1,252 views