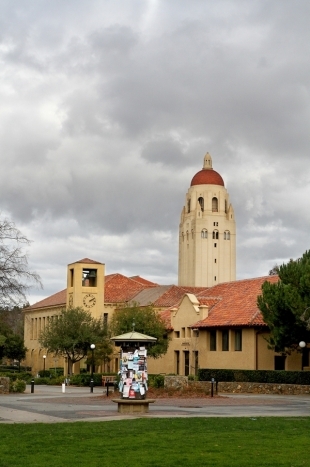 Deputies are investigating a battery that happened on Nov. 7 at the Stanford University campus. Weekly file photo.

Seems like there were a dozen violent crimes at Stanford in just the past week. Is this normal? Is the end of Daylight Savings Time bringing driving some people crazy?

This is nonsense. I watched these two women literally ride into another women, who put her arms up to shield her body from the impact of the bike. When woman rode into her she yelled an expletive, most likely due to the pain of impact.

This was not a hate crime.

I wasn't there, but what Nonsense is saying makes sense. A white woman yelling ethnic slurs at Asian women (for no reason) is very uncommon. For the above reason, it happens. There's no reason to yell racial slurs, but people act differently when they're ticked off, and purposely trying to offend. This doesn't sound like a hate crime to me. People that overreact are annoying.

Report Objectionable Content
Email Town Square Moderator
17 people like this
Posted by student
a resident of Stanford
on Nov 17, 2019 at 5:30 pm

Yelling racial slurs at strangers is always a hate crime. There is never an excuse. The only reason to it is that you are already a racist. Racial slurs don't just pop into your head.

Report Objectionable Content
Email Town Square Moderator
11 people like this
Posted by Anon
a resident of Another Palo Alto neighborhood
on Nov 18, 2019 at 10:36 am

Posted by student, a resident of Stanford

>> Yelling racial slurs at strangers is always a hate crime.

You might want to read the legal definition of a "hate crime" in California. Here: Web Link

It's unfortunate that various ethnic slurs are now being reduced to bicycling oversights as well. I guess cars weren't enough.

Report Objectionable Content
Email Town Square Moderator
7 people like this
Posted by Nick
a resident of another community
on Nov 19, 2019 at 8:47 pm

Yelling racial slurs is verbal abuse. It is not a hate crime. You don't have to be a lawyer or law enforcement to understand this. All it takes is common sense. People yell racial slurs because they know it's offensive, and they're trying to offend you. This isn't breaking news.

From the owner of LV Mar and La Viga, a Palo Alto restaurant inspired by Mexico City
By Elena Kadvany | 4 comments | 3,868 views

Can you Pay to Reduce your Carbon Footprint?
By Sherry Listgarten | 11 comments | 2,698 views

You Can Help: Scents and Migraines
By Chandrama Anderson | 0 comments | 2,282 views