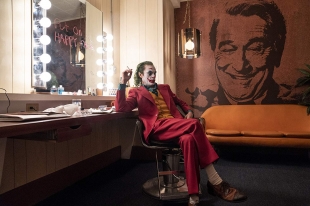 Joaquin Phoenix stars as a homicidal clown in the psychodrama "Joker." Photo courtesy of Warner Bros.

Director/co-writer Todd Phillips -- best known for "The Hangover" and its sequels -- takes Batman's most famous villain for a joy(less)ride in "Joker," and the results are decidedly mixed. And yet this psychodrama, an origin story for the DC Comics character, qualifies as riveting due to its casting coup of Joaquin Phoenix as the homicidal clown prince of crime.

For years, Phoenix has steadily built a case for himself as the heir to method-acting giants like Marlon Brando and Robert De Niro. Here he plays mentally ill clown and aspiring stand-up comedian Arthur Fleck (soon to be reborn as Joker), and De Niro gives his blessing by showing up as late-night talk show host Murray Franklin, a nod to the Scorsese films "Joker" references.

A veteran of institutionalization, Fleck quickly proves to be the ultimate male outcast. He's living with his mother and taking on grim gig after grim gig as a clown for hire between psych sessions with a social worker who is his only conduit to his regimen of seven different meds. Inevitably Fleck's lifelines get cut off one by one, leaving him dangerously adrift.

In this pre-Batman Gotham City, Thomas Wayne (Brett Cullen) hovers on the sidelines as the mayoral candidate who makes paternalistic populist promises but keeps veering into callous condescension.

This may be the film's most interesting subversion amid its magpie style and thematic muddle: In the process of positioning future supervillain Joker as working-class antihero, the film reckons with Wayne's super-elite status and gated mansion in a manner that eats away at his typically philanthropic image. Pointedly, both Wayne and Franklin spit out the word "pal" at Fleck numerous times while treating him more like a mosquito than a man.

If "Joker" has lessons to impart, they are these: Don't bully, because your victim may be the next mass murderer; beware of the poor masses; and oh yeah, allocate more social resources to mental health.

The film suggests that empathy would go a long way to solving a problem like Fleck. "Joker" isn't the film to seriously tackle this or any issue -- it's more concerned with flair than genuine inquiry -- but Phoenix's pained, raw-nerve performance is one for the ages.

Coronavirus: Plan ahead now for a big outbreak
By Diana Diamond | 22 comments | 4,739 views

The first few seconds after awakening; before I remember the virus
By Chandrama Anderson | 0 comments | 1,985 views

Can you Stay Healthy without Making More Trash?
By Sherry Listgarten | 2 comments | 1,330 views