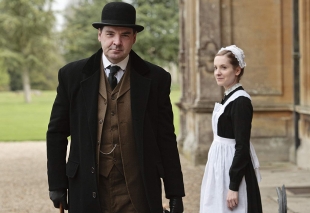 Back in 2010, the PBS series "Downton Abbey" offered an alternative riff on the old "Upstairs, Downstairs" paradigm: a tale of an aristocratic English household above and their servants below. Even as "Upstairs, Downstairs" saw its own revival the same year, "Downton Abbey" outlived its inspiration, running six seasons, and four years after its television finale, spawning a big-screen follow-up of the same name. Fans will likely delight in this reunion movie; others have no reason to bother.

The swanky English counterpart of America's "Sex and the City" sequel movies, "Downton Abbey" proves so congealed from its 52-episode history that it's hard to tell if the actors are overacting or not. Creator Julian Fellowes pens this fan-service follow up with its "Dick Van Dyke Show" plot: Uh oh! The boss is coming over for dinner. Everything has to be perfect!

In this case, of course, "the boss" means King George V (Simon Jones), accompanied by Queen Mary (Geraldine James). In 1927, their royal tour through the English countryside will include a stop at Downton, the Yorkshire estate of the Earl of Grantham, a.k.a. the Crawley family. The perpetually bemused Earl, Robert Crawley (Hugh Bonneville), and his wife, Cora (Elizabeth McGovern), oversee the preparations of the staff, now ostensibly led by Thomas Barrow (Robert James-Collier). But Charles Carson (Jim Carter) steps out of retirement to get the job done right, the internal serving-staff tensions only exacerbated by the arrival of the Royal Staff.

The story's three-act structure roughly corresponds to three royal soirees: a parade, a dinner and a ball. A variety of dramatic subplots follow, including one particularly clumsy and borderline pointless subplot that involves a burst of cheesy peril. Another plot thread that threatens to "out" the closeted Barrow and put him in legal jeopardy. The core plot point for the Crawleys involves guest star Imelda Staunton as Robert's cousin (and Queen Mary's lady in waiting) Lady Maud Bagshaw, who intends to make a play for the future of Downton. Of course, Dame Maggie Smith's Dowager Countess (again in a "Golden Girls"-style double-act with Penelope Wilton's Lady Merton) conspires to shut down Bagshaw.

A couple of fresh romances also stir to life at the story's margins, but "Downton Abbey" concerns itself much more with romanticizing the traditions of privilege, the British Empire and the royal family. The King and Queen prove entirely wise and benevolent, Downton's pride-hurt serving staff grovels and schemes for the right to serve them rather than have a night off, and even Robert's Irish Republican son-in-law, Tom Branson (Allen Leech) -- who claims here to be "not much of a royalist"-- repeatedly goes out of his way to make a case for the royals.

While none of this is incredible, per se, there's something unseemly about Fellowes turning it into entertainment in 2019. Sure, it's history (sort of), but wildly elite families being served and flattered by grateful servants is so last century. In the world of "Downton," the family and the help act like pals at times, but for every pat on the head the servants get, there's a scene like the one in which staff member Anna Bates (Joanne Froggatt) flatteringly consoles Lady Mary Talbot (Michelle Dockery): "Downton Abbey is the heart of this community, and you keep it beating." Forgive me for suggesting that Fellowes -- or, as he's sometimes known, Julian Alexander Kitchener-Fellowes, Baron Fellowes of West Stafford DL -- might consider "Downton" the cake he's letting us eat.

Coronavirus: Plan ahead now for a big outbreak
By Diana Diamond | 22 comments | 4,726 views

The first few seconds after awakening; before I remember the virus
By Chandrama Anderson | 0 comments | 1,962 views

Can you Stay Healthy without Making More Trash?
By Sherry Listgarten | 2 comments | 1,260 views