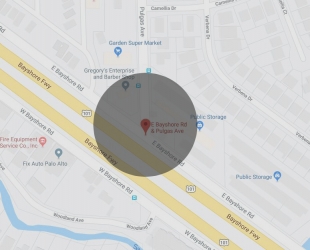 A man shot in the area of East Bayshore Road and Pulgas Avenue in East Palo Alto on Sept. 7 succumbed to his injuries two days later. Image courtesy Google Maps.

Is this two shootings in two days? Or two different accounts of the same shooting?

It may be the first homicide of the year, but is it the first or second (or more) shooting?

Report Objectionable Content
Email Town Square Moderator
6 people like this
Posted by RIP VIctor
a resident of Menlo Park
on Sep 19, 2019 at 6:53 pm

I remember Victor as a caring young man who watched out for his younger sister and brother. He was a very nice young man who will be missed by all of his family and friends. Rest In Peace Victor!

Flying: How to lower your impact
By Sherry Listgarten | 8 comments | 1,852 views