In split decision, school board shuts down proposal to change two-meeting rule 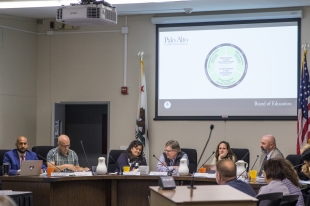 Several parents and community members spoke out against a proposal to make the Palo Alto Board of Education's two-meeting rule the exception rather than the rule at its Sept. 10 meeting. File photo by Veronica Weber.

Hmmm Ken Dauber - don't seem to have the facts. According to the Post, the Palo Alto City Council does it.

Shounak, thank you for listening and for being open-minded.

City Council requires 2 meetings for some ordinances, not everything. I didn't know that the school board apparently discusses everything twice, seems a bit much. I pay attention to City issues and just check the online agenda to find out what is coming up. Why is PAUSD special? People don't pay as much attention?

Report Objectionable Content
Email Town Square Moderator
10 people like this
Posted by Another Paly Parent
a resident of Palo Alto High School
on Sep 11, 2019 at 11:51 am

The school board does NOT discuss everything twice. Many items are for consent or action and were done in just one meeting. More complex items were discussed in the first meeting and voted in the second meeting but allowing public input before the decision. Board members already have the right to waive the two meeting rules for items that are straight forward and need a decision right away.

Also, I am not sure what is the base of Mr. Dauber's claim that we are the only board that has the two meeting rules. According to Mr. Dave Price of the Daily Post, PAUSD City Council, Menlo Park and other school districts ALL have the two-meeting rules in their bylaw. Whether they follow it is another issue.

Report Objectionable Content
Email Town Square Moderator
4 people like this
Posted by Paly parent
a resident of Community Center
on Sep 11, 2019 at 11:56 am

Well the PA City Council doesn't have a two meeting rule except for specific cases with ordinances. That doesn't sound the same to me. The school board sounds confusing. How does anyone know if something is going to be voted on or not and when?

Report Objectionable Content
Email Town Square Moderator
11 people like this
Posted by Samuel L.
a resident of Duveneck/St. Francis
on Sep 11, 2019 at 1:01 pm

Samuel L. is a registered user.


@Paly Parent, City council puts out their agenda two weeks ahead of their meetings. PAUSD puts it out Fri night for a Tuesday meeting. Not much time to gather useful input.

Report Objectionable Content
Email Town Square Moderator
14 people like this
Posted by MD Mom
a resident of College Terrace
on Sep 11, 2019 at 2:12 pm

MD Mom is a registered user.


Ken Dauber--doing things two times actually DOES make the issues more transparent. Not every parent can attend the council meetings, but people can read the newspaper articles about the council meetings and issues, and speak up at the next meeting. One way the meetings can be more efficient it to limit the time that the council members can speak. Some of you go on and on and on...

Report Objectionable Content
Email Town Square Moderator
3 people like this
Posted by Pa
a resident of Barron Park
on Sep 11, 2019 at 8:38 pm

.... And apparently it’s not possible to even consider getting agenda out earlier .

Report Objectionable Content
Email Town Square Moderator
4 people like this
Posted by Wishful thinking
a resident of Charleston Meadows
on Sep 12, 2019 at 11:04 am

@Green Acres: Shounak is the one who voted to bring this forward.

Report Objectionable Content
Email Town Square Moderator
5 people like this
Posted by Green Acres parent
a resident of Green Acres
on Sep 12, 2019 at 11:24 am

Shanouk and Ken Dauber cooperated during the election, each recommending that people vote for the pair. Since Shanouk got elected, he's generally voted the same as Ken Dauber. This stands out as an exception - one I'm happy to see.

While the board was able to distance themselves from this proposal, saying it was not their doing, as it was sent to them by another committee, the (BPRC?). One of these PAOL article discloses that this subcommittee is a 2 person committee. Take a guess at who is on it? Dharap and Dauber. And what a bunch of obfuscating rhethoric by Dauber and he tried to make it seem like he wasn’t for it and supported many of the views against removing the rule and then goes on to say, why we should make the hard decisions and get rid of it anyway. NOT ONLY NO TRANSPARENCY, TRYING TO CONFUSE THE MATTER.

Oh how I wish Kathy Jordan was on the board, too bad the current board had no confidence in themselves to win without corruption and abhorrent behavior. Kind of like the admissions corruption, paid to keep her out.

'Are they ready for fully innovative Indian food?' Ettan arrives in Palo Alto with chaat, caviar and a secret menu
By Elena Kadvany | 1 comment | 3,835 views

Flying: How to lower your impact
By Sherry Listgarten | 15 comments | 2,745 views