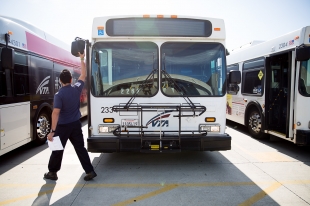 It is not VTA's fault that Palo Alto cannot make up its mind on the grade separations.

VTA is even more screwed up than Palo Alto city government.

Palo Alto should have its own independent city bus line...perhaps coordinating with the Marguerite Shuttle.

The VTA covers a lot of area & that is probably the number 1 problem in terms of service, reliability & ridership experience.

We should be given greater representation as we are in the extreme north of Santa Clara County AND we contribute lots of $ AND we need services, too.

Report Objectionable Content
Email Town Square Moderator
2 people like this
Posted by Peter
a resident of Midtown
on Aug 23, 2019 at 7:53 am

I expect a lot of strong word and even a memo to come from City Admnins, but that's it. All smoke and no fire from our City execs. First they will grand-stand and say they are going to help residents and they are going to roll-over. It's like this with every major project.

I read the grand jury report and I admit that I was disappointed. Certainly, there have been some lapses of judgement, such as the Eastridge light rail extension. But, overall, I don't see a governance problem, I see a "Broadacre City" Web Link problem. While most of the Peninsula is a kind of linear city, down to Mountain View, most of Santa Clara County was developed in the era of low job concentrations. That makes economic public transit very difficult. Transit governance is not going to solve that-- putting jobs where transit service exists will move things in the right direction. We have to subsidize transit heavily now and encourage job growth on transit corridors, e.g. VTA light rail, instead of being spread out.