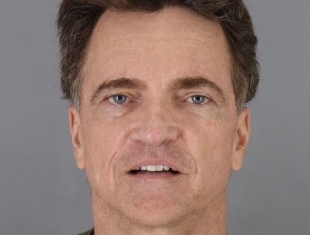 Randolph Haldeman, who is accused of sexually assaulting several people at the Ladera Recreation Center and his home in unincorporated Menlo Park, was arrested for a second time on Aug. 21. Photo courtesy of San Mateo County Sheriff's Office.

Renee Batti writes for The Almanac, the sister publication of PaloAltoOnline.com.

He was released on bail HOURS after being arrested on July 25 on two counts of "lewd and lascivious acts" with boys ranging in age from 8 to 13 years; these are CHILDREN. And 3 days later On July 28 nearly a MONTH ago, the Sheriff’s Office heard from other people who were possibly abused, including one person from another country, said Detective Rosemerry Blankswade. “This is just the tip of the iceberg,” she said, and then proceeded to cut him loose...
I guess that standard operating procedure when the perp is a rich white guy with a resume littered with all the CEO buzzwords...CEO, Game Changer, Stanford,BSEE...AND he has top secret NSA clearance...do you feel safer now?
Web Link

The justice system is not just.

>>> I guess that standard operating procedure when the perp is a rich white guy with a resume littered with all the CEO buzzwords...

It is not that uncommon as some people have their personal demons to contend with.

We have all heard of these kinds of incidents in other areas & professions as well.

Report Objectionable Content
Email Town Square Moderator
16 people like this
Posted by white privilege
a resident of Menlo Park
on Aug 22, 2019 at 8:13 pm

It's called "white privilege". Don't expect that to change any time soon.

Report Objectionable Content
Email Town Square Moderator
1 person likes this
Posted by Unfortunate and uncalled for?
a resident of another community
on Aug 23, 2019 at 7:49 am

Are you referring to my comments as being unfortunate and uncalled for? Why is that? This guy had every advantage in the world. He deserves a very long jail sentence but what is 'unfortunate' is that he can afford the best defense lawyer, and will likely get off with a much lighter sentence than someone assigned a public defender.

Unfortunate and uncalled for...give me a break.

Report Objectionable Content
Email Town Square Moderator
4 people like this
Posted by Linked In
a resident of Palo Alto High School
on Aug 24, 2019 at 7:51 pm


This is not called white privilege. It is called a growing tolerance for rotten behavior that grows out of the Sanctuary City laws. They permeate a total disregard for the general population. Was there a judge that set the bail and let him loose? There is no mention of a judge. Time to have a new judge issue an arrest warrant and keep him in jail until his court case is scheduled. We seem to be in a position of running into people that are continually getting into real trouble then let loose on the street. We keep reading about people that are picked up for one crime then there is a list of other crimes that have occurred. Our area is becoming unsafe.