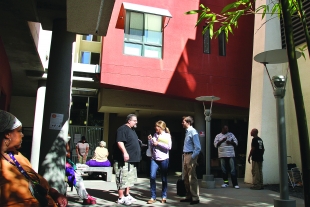 The Opportunity Center for the homeless at 33 Encina Ave. in Palo Alto is the site for a new, free hot-breakfast program. The building, seen here in 2011, offers a drop-in center, housing and other services. File photo/Veronica Weber.

Andrea J is a registered user.


Since La Comida serves hot lunches to seniors M-F 11:45 to 12:15 at the Masonic Center on Florence St, I wonder whether a charity such as LifeMoves might provide an 11-meal lunch card (normally selling for $30) to homeless seniors. La Comida is part of the Santa Clara County Senior Nutrition Program and subsidizes the lunches, but any senior regardless of income is welcome (suggested donation of $3 for people without a lunch card). The monthly menu can be viewed at
Web Link.

Green Gables is a registered user.


Maybe some of the homeless, low income people could apply for jobs so that restaurants would not have to close due to lack of staff who cannot afford living around here. They can continue living at the Opportunity Center, can they not?

Solution...hand out meal vouchers to restaurants volunteering to participate in a 'feed the homeless' program.

Incentives could include tax breaks/write-offs.

Many decent places to dine in PA...time to share the bounty.

Just have the meals prepped 'to go' (aka take-out).

Report Objectionable Content
Email Town Square Moderator
6 people like this
Posted by Food Trucks!
a resident of Adobe-Meadow
on Aug 19, 2019 at 8:16 pm

Palo Alto is a wealthy city. They could afford to buy some food trucks & hire drivers & food preppers to drive to established sites where the homeless could get a meal.

Report Objectionable Content
Email Town Square Moderator
7 people like this
Posted by musical
a resident of Palo Verde
on Aug 19, 2019 at 8:39 pm

"Palo Alto is a wealthy city." Last I looked, we're flat broke. Or worse, a billion in debt.
Too many promises to too many people. Perpetually nosing around for new taxes.
Wait til you see the next ballot. Every solution brings further expenses.


Report Objectionable Content
Email Town Square Moderator
12 people like this
Posted by Yes!
a resident of Another Palo Alto neighborhood
on Aug 20, 2019 at 12:47 am

Glad that they ended lunch and dinner. Stop attracting the homeless to this city. I pay a huge mortgage, I suffered years for my career. Capitalism, not socialism! Oil and water don't mix. All the volunteers who feel good about serving these homeless should invite them into their homes, not invite them onto our city streets.

Report Objectionable Content
Email Town Square Moderator
2 people like this
Posted by @YES from Timmy
a resident of Barron Park
on Aug 20, 2019 at 9:10 am

I respect your honesty. Its good to see people like you are not hiding but out in the open now. Hope you would be more proud of your belifes and at least put your name out their. Most of us have a different view on this subject. [Portion removed.]

Report Objectionable Content
Email Town Square Moderator
10 people like this
Posted by Would like to know the rationale
a resident of Palo Verde
on Aug 20, 2019 at 10:13 am

Would like to know the rationale is a registered user.


I volunteered for this program for many years and donated money. I would like for LifeMoves to provide a clearer rationale for closing this program. Some of the attendees were very needy, and it was nice for them to have a hot, sit-down meal as well as a brown-bag lunch to take with them. Some were not so needy, but if we were providing fellowship then that was good. Volunteers would prepare food and also get cooked food that was donated from places, so that was a good use of food that would otherwise be wasted. People who volunteered were pretty devoted, many of them long-timers. Why did this need to close down?

Report Objectionable Content
Email Town Square Moderator
14 people like this
Posted by Hungry & Homeless
a resident of another community
on Aug 20, 2019 at 1:14 pm

Why can't Palo Alto have a 365 day dining program for the homeless like Glide Memorial Church in SF? Or a St. Anthony's style dining hall?

This is a wealthy city & seeing all of the restaurant diners scarfing down their $18.00 spinach salads clearly exemplifies the self-serving, self-centered mentality that permeates this area.

There are no true Christians in Palo Alto...just selfish people.

Report Objectionable Content
Email Town Square Moderator
10 people like this
Posted by Step Up To Thye Plate PA & Show Some Humanity
a resident of Duveneck/St. Francis
on Aug 20, 2019 at 6:44 pm

How about turning the Fry's complex into a city homeless shelter with shower facilities, a laundromat, dining hall with kitchen & separate sleeping dormitories for women with children, single males & single women?

There is plenty of square footage available and Park Boulevard is easily accesible via Caltrains, ECR or the California Avenue subway beneath Alma.

The money is there & fundraising is also another possibility to renew a portion of the funding requirements.

It is time for palo Altans to show some humanity.


Report Objectionable Content
Email Town Square Moderator
4 people like this
Posted by Former Stanford Grad Spouse
a resident of Ventura
on Aug 21, 2019 at 11:04 am

No mercy in Palo Alto for those who are less fortunate than average. And that "average" is very, very high. I hate to see this food program eliminate offerings. People, especially our elderly, rely on these meals.

Report Objectionable Content
Email Town Square Moderator
2 people like this
Posted by Heartless Soul
a resident of University South
on Aug 21, 2019 at 12:35 pm

> Glad that they ended lunch and dinner. Stop attracting the homeless to this city. I pay a huge mortgage, I suffered years for my career. Capitalism, not socialism! Oil and water don't mix. All the volunteers who feel good about serving these homeless should invite them into their homes, not invite them onto our city streets.

^^^What a guy. Is this representative of the the new Palo Alto mindset?

>> There are no true Christians in Palo Alto...just selfish people.

^^^ Non-Christian priorities take precedence these days in Palo Alto. Besides, the neighborhoods are changing so why expect the unreasonable?

>>> It is time for palo Altans to show some humanity.