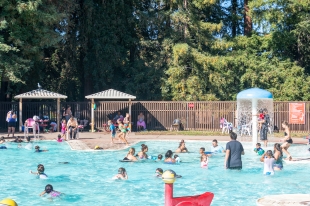 Families escape from 90-degree heat at Rinconada Pool in Palo Alto on July 10, 2018. The Bay Area is under its third consecutive Spare the Air alert on Aug. 15 in addition to a heat advisory for parts of the region. Photo by Adam Pardee.

Flying: How much is enough? It's personal.
By Sherry Listgarten | 7 comments | 1,954 views