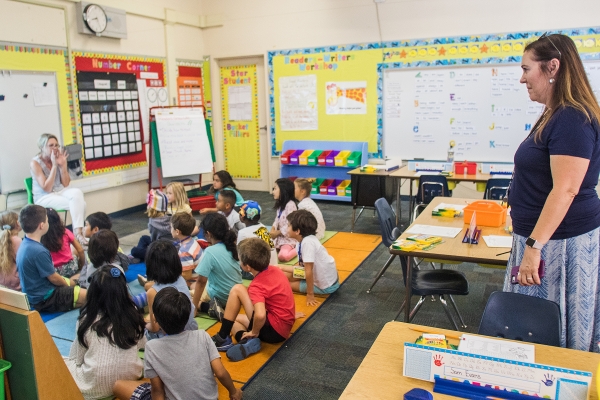 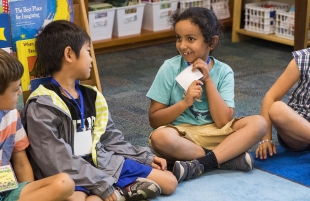 Escondido Elementary School second-graders, from left Ben, Mason and Gautam, introduce themselves during an icebreaker activity during the first day of school on Aug. 14. Photo by Veronica Weber.

5 people like this
Posted by Resident
a resident of Another Palo Alto neighborhood
on Aug 14, 2019 at 5:35 pm

Always seems to happen, the schools go back and then we have temps reach 100F (according to my phone).

How surprising! 100F you say? In August? Unheard of. Move the first day of school to after labor day, when it should be. Problem solved. Kids should be enjoying summer break for few more weeks, not toiling in schools in 100F temperatures. Whichever genius came up with idea to have school start this early...

A Board member said students at NPS and NPA schools should have the opportunity to participate in some of the public school services, to see if they can improve and come back to the public school. This includes District summer school, access to tutoring, and preparing for college and ensuring graduation on time.

These are some of the most disadvantaged students there are. It does not make a lot of sense to use legal agreements to say students are not students, and to block out disabled students from receiving services PAUSD already offers and the students need. The District's lawyers and their adversarial legal culture created this problem. It is unfair to the disabled. It does not have to exist.

Yeah, it's a bit rough to have to go to school in nearly 100 degree weather (for the few days it's that hot). The classrooms don't have A/C unless they're "permanent portables."

Thankfully, we don't have that many super hot days. But as global warming takes hold, that may change. At some point if we have more hot days, it might affect the kids' learning ability.

Other than the heat in August, it's been a good start to the school year. Many thanks to the dedicated teachers and faculty at Escondido and all of PAUSD who help our kids. It's a great community and we should always strive to improve.

It's especially important to bridge the equity gap as mentioned by another commenter. I know we are trying, but it can always get better.

But yes, what happened to starting school in September and ending in June!? Here's the silver lining though... since we end in May, you can plan summer vacations for right after school ends. It'll be cheaper and less crowded, because most kids don't get off until June :).

I do not know, Escondido is not the same school. It does not feel as welcoming and the community does feel the same!