Nationwide campaign aims to strengthen ties between communities and police 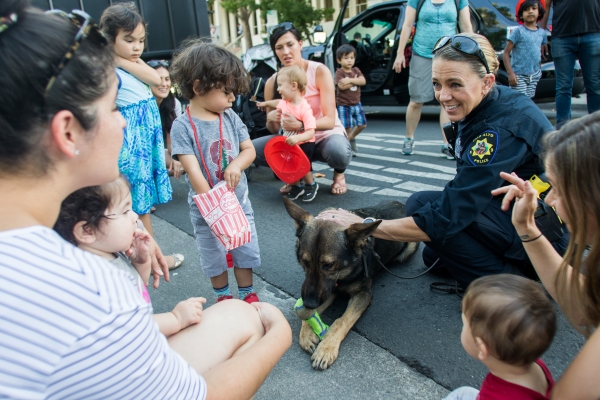 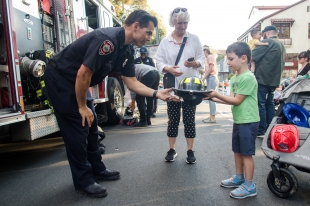 Palo Alto fire operator and paramedic Mike Ortiz, left, shows Enzo Diolaiti, 5, his helmet while discussing his work with the agency as family friend Cathie Foster, center, looks on, at National Night Out on Aug. 6. Photo by Veronica Weber.

We had a wonderful National Night Out on our block with Pizza, Pelligrino and doughnut with neighbors aged 5 to 85! Many members of the police department visited - the children were able to sit on the police motor cycle, meet the Chief, other officers, the City Manger and a couple of City Council members! The goody bags were a huge success. Grateful thanks to all!

Gwen did a great job hosting the event! There were dozens of residents attending including kids and seniors.

Talking to the cops also was interesting. They verified that crime in Barron Park is low, but there are lots of auto break-ins along our stretch of El Camino, and El Camino in general. Even if the thieves are caught they can get out of jail in a day and the penalties are minor, so they go back to doing their break-in business soon after they are released.

Thanks to our high property values only 2 cops live in Palo Alto, and some have to commute over 2 hours to get here to protect us. We should set aside some of the BMR units being included in new housing for police and fire, even though they are too well paid to qualify as BMR occupants. Maybe some of the proposed housing at Cubberly can be set aside for public safety officers, not just teachers.

We had a fun event in Greenmeadow with a potluck BBQ, ice cream and visits from a large firetruck and a PAPD cruiser. I think the adults enjoyed seeing the equipment and interacting with the officers as much as the kids did. They were patient about answering lots of questions.

Thank you for reaching out and for keeping us all safe, PAFD and PAPD. We are grateful for your important work!

Report Objectionable Content
Email Town Square Moderator
4 people like this
Posted by Howard Kushlan
a resident of Downtown North
on Aug 7, 2019 at 1:25 pm

This is so depressing to see. This is called copaganda at its finest. [Portion removed.]

Report Objectionable Content
Email Town Square Moderator
2 people like this
Posted by Ray
a resident of Professorville
on Aug 7, 2019 at 6:07 pm

We had planned to attend but came down with a bug. I wanted to see my pal, Bohdan again. We met him with Office Julie after dinner at an El Camino restaurant. Yes, there can always be a bad apple, but I think that Palo Alto is blessed by having good police officers. If someone is depressed by seeing the City reach out to citizens, I suggest it is more depressing to see someone denigrate the City and Police and other people who look after our safety.

Embrace the law, lest it embrace you!

Report Objectionable Content
Email Town Square Moderator
4 people like this
Posted by Not Naive
a resident of Community Center
on Aug 8, 2019 at 12:51 pm

>> This is so depressing to see. This is called copaganda at its finest.

^^^It's a PR measure on the part of the various PA public safety agencies.

Do you remember when the PAPD used to hand out baseball-style cards to kids?

Firefighters & EMTs are OK. Dealing with the PD is is a double-edged sword...like if/when you have a disagreement with them over an issue.

Then all bets are off despite any goodwill tours/gestures.

Flying: How much is enough? It's personal.
By Sherry Listgarten | 7 comments | 1,955 views