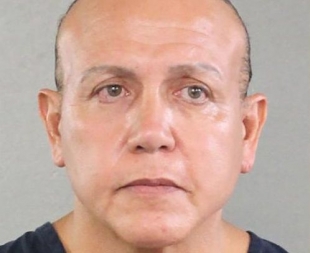 Cesar Sayoc, seen above in a 2015 mug shot, was sentenced to 20 years in prison for mailing explosive devices to political figures, including Democratic presidential candidate and current U.S. Sen. Kamala Harris. Image by the Broward County Sheriff's Office obtained via Wikimedia Commons.

Why is this story up but nothing about the Gilroy shooting.??????? Not one story. For god sake it happened in the same county that we live in. Can anyone answer this.???

Agree with Lauren, there is NO mention of Gilroy murders on this website, at the hands of a domestic terrorist (motivate by the hateful rhetoric out of our DC leader). Yet there is a story on Gilroy Gardens and tons of sponsored links mentioning Gilroy. You can bet if one of the victims was from an affluent resident of Palo Alto it would be a top story. Are some lives more worthy of coverage than others?

VOTE BLUE 2020, that is the only answer. Spineless Senate won't even pass background checks bill. #DITCHMITCH

There's been a steady stream of these kook being marched off to jail. Good.

Report Objectionable Content
Email Town Square Moderator
9 people like this
Posted by musical
a resident of Palo Verde
on Aug 6, 2019 at 11:57 am

^ C'mon guys, we agreed not to give domestic terrorists a media platform to display their endeavors. Especially local. No photos, no headlines, no encouragement for copycats. Like with Caltrain track "incidents". Perhaps we can have some frank discussions with law enforcement this evening at PAPD National Night Out.

We also need to talk about angry men
and about toxic masculinity.

Report Objectionable Content
Email Town Square Moderator
6 people like this
Posted by A Moral Compass
a resident of Leland Manor/Garland Drive
on Aug 6, 2019 at 12:19 pm

A Moral Compass is a registered user.


Quite simply...there are a lot of unidentified angry/disturbed individuals just waiting to step out of their abodes to wreak havoc on the public at large.

While many are 'in waiting' something triggers their actual actions and no MD, psychiatrist or politician can accurately explain the reasons.

> We also need to talk about angry men and about toxic masculinity.

Cuz other countries don't have that?

Head down to Perth and tell them they're not masculine enough. Let us know how it goes.

> there are a lot of unidentified angry/disturbed individuals

Y'all been listening to #MoscowMitch again.