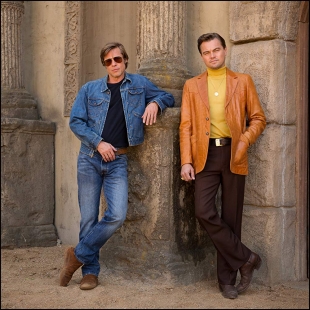 Brad Pitt and Leonardo DiCaprio star in "Once Upon a Time ... in Hollywood." Photo by Andrew Cooper, courtesy of Columbia Pictures.

For the comedy-drama "Once Upon a Time ... in Hollywood," Quentin Tarantino quantum-leaps back to 1969. In February, fading star Rick Dalton (Leonardo DiCaprio) laments his career. "It's official, ol' buddy," he tells his erstwhile stunt double and only friend Cliff Booth (Brad Pitt). "I'm a has-been." Dalton's salad days as the star of TV's "Bounty Law" are behind him, and after a few big-screen flops, he finds himself relegated to playing the "heavy" of the week as a nomadic TV guest star. (The dynamic between the two characters is loosely based on the relationship between actor Burt Reynolds and stuntman-turned-director Hal Needham.)

Rick's nerves have given him a stuttering tic, foreshadowing trouble for his latest guest shot on "Lancer." As Rick wrestles his demons on set, Cliff does his thing in his recent capacity as Rick's driver and personal assistant. In the process, a flirtation with hitchhiking hippie chick Pussycat (Margaret Qualley) leads Cliff to old stomping grounds, the Spahn Movie Ranch, where a mysterious commune has sprung up around some guy named Charlie.

While playing out compelling scenes in the moment, Tarantino also meticulously lays the groundwork for upcoming scenes, most prominently by positioning as Rick's next-door neighbors actress Sharon Tate (Margot Robbie) and her husband, director Roman Polanski (Rafal Zawierucha). The film's second act skips ahead six months to the Summer of '69, a telling time of hope, change and peace met with violence. "Once Upon a Time ... in Hollywood" takes Tarantino's nostalgia to a conclusion both logical and illogical, historic and fantastical, building to a black-comic climax that's both generous in its wishful thinking and gleeful in its ultraviolence.

True to form, Tarantino has made another exquisitely crafted film that chases poor taste and mature filmmaking with a juvenile prank as its punchline. The contradictions are part of the bargain, and "Hollywood" feels somehow both more and less than the sum of its parts depending on the wavelength you tune in to. "Hollywood" is mostly about inarticulate male friendship, about the inevitability of change that comes with time, but more so about how movies are our wish fulfillment and actors suffer their insecurities and anxieties for our pleasure.

On the surface are all the signs of the usual Tarantino film from the casting -- which includes Luke Perry in his final role, Damien Lewis as Steve McQueen and Nicholas Hammond (the first live-action "Spider-Man") as Sam Wanamaker -- to the sidetracks, such as a monologue from Bruce Lee (Mike Moh) that prompts an impromptu exhibition match.

Though the question "What the heck is this thing really about?" nags, there's no denying the greatness of Pitt's seemingly effortless comic performance and the lasting impression that he and DiCaprio are the screen team you didn't know you needed, zen cool married to restless, self-loathing ego. Again and again, Tarantino conjures up beautifully made scenes, like the hangout between Cliff and his pit bull Brandy or the slightly absurd friendship Rick strikes up with an 8-year-old method actor (Julia Butters). The film is all over the map and off the grid, set in the Hollywood of Tarantino's dreams.

Coronavirus: Plan ahead now for a big outbreak
By Diana Diamond | 22 comments | 4,739 views

The first few seconds after awakening; before I remember the virus
By Chandrama Anderson | 0 comments | 1,984 views

Can you Stay Healthy without Making More Trash?
By Sherry Listgarten | 2 comments | 1,328 views