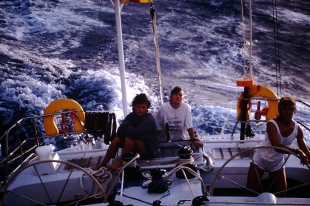 "Maiden" recounts the story of the first all-female crew to compete in the Whitbread Round the World Race in 1989. Photo courtesy of Sundance Institute.

Alex Holmes' documentary "Maiden" is an intriguing human-interest story with a wealth of concrete visual imagery that provides a fresh account of the first-ever all-female yacht crew to compete in the international Whitbread Round the World Race in 1989.

Holmes appropriately frames "Maiden" as a character study of Tracy Edwards, an Englishwoman who overcame long odds to achieve her dream of skippering a sailboat in the competition. Through an extensive interview and home movies, Holmes lays out Edwards' difficult yet strangely inevitable path to becoming a yachting legend -- a happy youth marked by an inspiring mother, an adolescence devastatingly disrupted by abuse and acting out, and an exhilarating and frustrating young adulthood spent trying to break in and move up in an entirely male-dominated sailing world that nonetheless held her dream of freedom and self-empowerment on the waves.

After hard-won stints as a stewardess, deckhand and first mate, Edwards found her entrée into the Whitbread by agreeing to serve as cook to an otherwise all-male crew (even in this capacity, she met resistance from some of the men). The principal narrative kicks in when Edwards determines that the only way to get what she wants is to do it with an all-female crew. After assembling a 12-woman crew and restoring a salvaged yacht redubbed Maiden, the 26-year-old Edwards thrusts herself into the daunting task of funding and prepping a 1989-1990 Whitbread bid. Unable to drum up British patriotism or media support, Edwards at last secures funding by mining the goodwill of King Hussein of Jordan, who became an admirer after a chance meeting with her.

At 33,000 nautical miles, the Whitbread constitutes the longest race on Earth, with all the mortal dangers such a venture entails: fatigue, weather, remoteness, mechanical or human failure.

Holmes gathers an impressive roster of interviewees, including much of the Maiden crew and a handful of male competitors and sports journalists from the time. Supported by Super-VHS footage shot on the Maiden and vintage news clips, the talking heads tell the story while acknowledging the best and worst of their own attitudes and those of Edwards: a phenomenally dedicated but often difficult leader operating under immense strain.

Holmes examines the time's ugly, vocal sexism that ruled mainstream culture: The film is a coming-of-age tale of personal triumph, an underdog sports story, a human-against-the elements survival tale, and a drama of a team coalescing under an inspiring leader.

It's a tricky balance, to be sure, one Holmes strikes by not getting into the weeds (or the reefs?) of anecdotes specifying sailing technique and teamwork. Though understandable, the choice sometimes contributes to a sense of airbrushing this portrait when greater detail could add texture. Overall, though, this "Maiden" voyage's degrees of heroism and ugly behavior and victory and defeat illuminate a gripping and inspiring story that demands to be remembered.

Can you stay healthy without making more trash?
By Sherry Listgarten | 6 comments | 3,040 views

Think about helping others in our coronavirus-affected area
By Diana Diamond | 7 comments | 2,778 views

The University of California’s flexible policies during COVID-19
By John Raftrey and Lori McCormick | 5 comments | 1,087 views