You won't believe in Beatles-fantasy 'Yesterday' 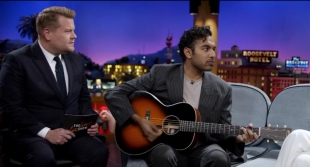 Written by Richard Curtis ("Love Actually") and directed by Danny Boyle ("Slumdog Millionaire"), the Beatles-themed romantic comedy "Yesterday" proceeds from a cutesy what-if premise: Following a 12-second global blackout, the Beatles songbook spirits out of existence, except in the mind of one man -- 27-year-old Jack Malik (Himesh Patel), a singer-songwriter languishing in obscurity. Before his windfall, Jack complains to his lifelong friend and faithful manager Ellie (Lily James), "You've got to stop pretending we're in a thrilling story with a big exciting end." Shortly after, Jack's on the short and winding road to viral international fame.

Before you know it, Jack's introducing the world to "Yesterday" (one of 15 Beatles tunes Patel covers in the film), living the artist's dream of "I wish I'd written that." There's situation comedy in the indignities that face an unknown musician, but it's not long before smirky songsmith Ed Sheeran (playing himself) turns up to hire Jack as an opening act. Sheeran's fictional manager Debra Hammer (Kate McKinnon, stealing the show again) swiftly poaches Jack from Ellie, who won't abandon her day job as a Suffolk schoolteacher. Just as fame pulls Jack and Ellie apart, they begin to reckon with the depth of their not-so-platonic love.

Though the musical angle dominates, it's a red herring for an equally unbelievable romantic comedy. The obstacles facing the couple hardly seem insurmountable, and Curtis labors to cut short every conversation between the two before it gets to the "We Can Work It Out" stage. Missed opportunities abound for a meaningful examination of an artist's insecurities; instead, we get a moral dilemma (should I plagiarize songs that were never written?) that's impossible and therefore irrelevant, paired with a wan romance. All you need is love ... and a better script.

If one turns off one's brain, "Yesterday" can be enjoyed as an empty vessel loaded up with great tunes.

Coronavirus: Plan ahead now for a big outbreak
By Diana Diamond | 22 comments | 4,721 views

The first few seconds after awakening; before I remember the virus
By Chandrama Anderson | 0 comments | 1,955 views

Can you Stay Healthy without Making More Trash?
By Sherry Listgarten | 2 comments | 1,258 views