TheatreWorks' 'Archduke' satirizes the assassination that set off World War I

In Rajiv Joseph's dark comedy, Gavrilo Princip is neither hero nor villain 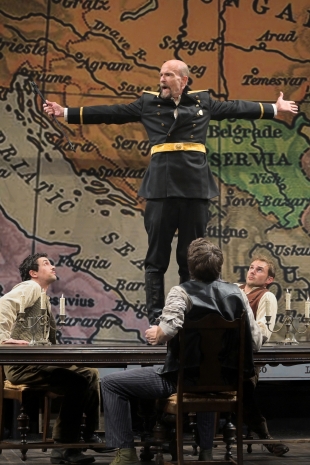 I'm not so sure that the assassin acted as a result of being prodded into it by Dragutin Dimitrijevic. The court case against the assassin in 1914 failed to find such evidence.

Don’t see this bad play. Although the acting is good, the play is terrible and too farcical—basically stupid and full of unfunny slap-stick gags. I love TheatreWorks and wish they had put on a better play.

Agree with Theater Goer, this play has little to redeem itself. We all know what happens in the end and the play provides no real insight or character development. Many of the comic elements are jarring. I fail to see how they add anything.

I expected more from this playwright and Theatreworks.

Report Objectionable Content
Email Town Square Moderator
2 people like this
Posted by More To The Picture
a resident of Mountain View
on Jun 13, 2019 at 5:21 pm

The irony of the assassination was that the first effort was foiled & the assassin accidently encountered the Archduke when the motorcade took an alternative route.

This would have made for an amusing and satirical insight playing off fate and one man's destiny to take someone out along with the repercussions that followed.

Report Objectionable Content
Email Town Square Moderator
3 people like this
Posted by Annette
a resident of Midtown
on Jun 13, 2019 at 9:02 pm

We left after first act.