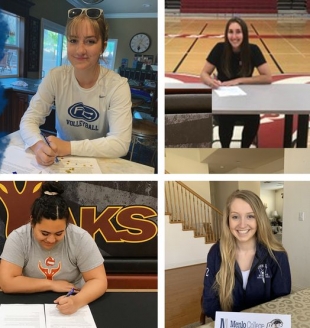 The Menlo College women's volleyball program announced announced its 2019 recruiting class on Thursday. The four who signed with the Oaks are all junior transfers who will make up for the experience and performance lost from this year's group of seniors. The Oaks are bringing in an opposite, outside hitter, middle blocker, and setter.

At the opposite, Kristen Whitney steps in from Folsom. The Folsom Lake College transfer has had two previous stops, spending a season at NCAA Division II Montana State Billingsst season with the Falcons.

Whitney tallied 123 kills across 27 matches, while loading up for 37 assisted blocks and 43 total blocks, good for third best on the team. She went off on September 29 against Shasta when she put up 11 kills and four total blocks to lead the Falcons to a four-set win.

At outside hitter, Lauren Schaefer arrives from Fullerton College. The junior out of Yorba Linda played all 21 matches last year for the Hornets and compiled 164 kills with 2.25 kills per set. Schaefer also one rackedup 18 aces and 131 digs.

Abbey Briggs makes her way to Menlo from Fresno City College. She will help solidify the net game as a middle blocker. The junior out of Auberry put up 101 kills last season with a hitting percentage of .251. She also finished second on the team with 14 solo blocks, 48 assisted blocks, and 62 total blocks. Her efforts helped lead Fresno City to the CCCAA State Championship match after finishing the year 29-4.

Kimberly Uluave is a setter who is from Yakima Valley College. The junior out of Kapolei, Hawaii ran a 5-1 and recorded 6.72 assists per set over the course of 22 matches, picking up 484 on the year to lead the Yaks. Dangerous at the line, Uluave also led Yakima Valley with 29 aces and finished with 172 digs, while also helping out on 14 blocks and picking up 66 kills.

"We have four highly talented, high-character individuals joining our program and I am very excited with all these women will bring to our team," Menlo coach Denise Sheldon said. "They possess great volleyball IQ, high-level volleyball experience in the community college system, and are all terrific people. The returning players from this year's team and this class will develop a strong core group together, and I expect this class to come in and challenge for important roles right away."

The Oaks have won playoff games in the GSAC in consecutive seasons and look to build on that in year three with coach Sheldon at the helm of the program. The season is set to begin in August, with GSAC games beginning in September.

The Oaks signed Nura Galmes, who hails from Barcelona, for the 2019-20 season.

Menlo enjoys a European flavor with student-athletes from Spain and France.

The 5-9 swing player is in her final year at Col-Legi Lestonnac de Barcelona, a school founded in 1650. Galmes and her squad won the Second Division of the Catalonian Basketball Championship in 2017 where she was named MVP, and finished as runners up in 2018, as she was given the MVP award again. She also was awarded MVP of the Banyoles Tournament in 2017. This past season, Galmes averaged 13 points per game, up from 12.1 points per game a season prior.

About Galmes, Coach Shannon Spataro stated, "We are very excited about Nura coming to Menlo. She is a dynamic guard that can score in a variety of ways, defend multiple positions and has an outstanding work ethic. She is also a dedicated student with a fun loving personality. We are looking forward to Nura having a great career."

The Oaks will look for Galmes and the rest of the 2019-20 recruiting class to make a big impact this upcoming season, as Menlo graduated three seniors from their 2018-19 squad, and look to make it back to the NAIA National Tournament for a third consecutive year. Basketball season will get underway in November of 2019.

The first few seconds after awakening; before I remember the virus
By Chandrama Anderson | 0 comments | 2,991 views

Can you stay healthy without making more trash?
By Sherry Listgarten | 4 comments | 2,398 views

Think about helping others in our coronavirus-affected area
By Diana Diamond | 5 comments | 2,205 views