Consultant says district could have fewer than 1,800 students by 2023 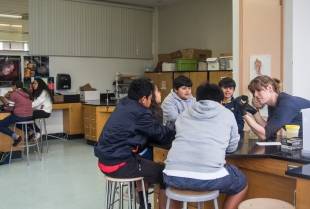 Ravenswood Middle School sixth-graders learn about the human brain in March 2018. A new report projects the Ravenswood school district in East Palo Alto will see enrollment drop in both elementary and middle school grade levels over the next five years. Photo by Veronica Weber.

Why not simply bus the remaining EPA students to Palo Alto & integrate them into the PAUSD system?

Palo Alto could use some more diversity as it is primarily White & Asian now. African-Americans make up less than 2% of PA's population.

This is the primary why Palo Altans as a whole cannot relate to the issues & residents of EPA...they are sequestered in their own little world of self-serving priorities.

Challenging the Tinsley Program won’t solve this enrollment issue. Because it is a court order, all the districts will have to go back to court and I’m sure none of them want to waste money on attorney fees right now. Even if the program ended, those parents would opt to enroll their children in charter or private schools since they don’t like Ravenswood schools in the first place. I’m sure some of the school board members even have their own kids in the program so someone should really ask them in the next board meeting because that shows how much even they don’t believe in Ravenswood. Wasn’t Ana Pulido a product of Tinsley and attended Palo Alto school?

Report Objectionable Content
Email Town Square Moderator
4 people like this
Posted by WhatamImissing
a resident of East Palo Alto
on Mar 29, 2019 at 9:53 am

I'd love to see the Tom Williams report, anyone have a link? So the big elephant in the room... the Benefits of smaller class sizes! - Teachers love that, and the students benefit is all sort of ways. I think it's great! Go East Palo Alto!

Report Objectionable Content
Email Town Square Moderator
11 people like this
Posted by Schools are Central
a resident of East Palo Alto
on Mar 29, 2019 at 10:00 am

The primary effects of Tinsley have been a better education for a few (mostly middle class EPA families), no better education for the vast majority (who do no better at PAUSD and elsewhere than the same kids do in Ravenswood), and the systematic gutting of Ravenswood/EPA, as 20% of their most engaged and resourced families lost their primary connection to the district and the community.

In return, Ravenswood got nothing - just the job of educating the remaining low-income, many technically homeless students. If Tinsley was meant to help the EPA/Ravenswood community, isn't 30 years of failure enough? Time to try something else.

Report Objectionable Content
Email Town Square Moderator
5 people like this
Posted by Schools Are Central
a resident of East Palo Alto
on Mar 29, 2019 at 10:04 am

Presentation to the board Web Link

Report Objectionable Content
Email Town Square Moderator
10 people like this
Posted by Cheryl
a resident of Woodside
on Mar 29, 2019 at 10:48 am

The Tinsley Program was supposed to be a two-way thing where non-minority students from Belmont, Las Lomitas, Menlo Park, Palo Alto, Portola Valley, Redwood City, San Carlos, and Woodside would go to Ravenswood but I believe only two families have done that in the 30+ years of the court order. One of the goals of the court order was to enhance inter-district cooperative efforts but that seems futile when the districts have their own problems to attend to.

Palo Alto will soon have the option to leave the program like Redwood City did in 1992 because their minority population is less than 1% away from the 60% threshold.

Report Objectionable Content
Email Town Square Moderator
3 people like this
Posted by Schools are Central
a resident of East Palo Alto
on Mar 29, 2019 at 11:32 am

@Cheryl, agree, Tinsley was meant to be a three legged stool - the VTP, both in and out of Ravenswood; creation of "model" (magnet) schools in Ravenswood; and a "Ravenswood Improvement Program" funded by the state. The only part that survived was VTP outbound, which amounts to a band-aid on a bullet hole.

On PAUSD, there are two big assumptions in your calculation - one is that all Asians would count as minority, which I doubt the judge would agree on in 2019; and that "more than one race" does as well. PAUSD white & more-than-one-race is now 47%, so all other, including Asians, is 53%. I also doubt very much that PAUSD would choose the leave the program, unless there was an alternative that was better.

Report Objectionable Content
Email Town Square Moderator
10 people like this
Posted by Cheryl
a resident of Woodside
on Mar 29, 2019 at 11:48 am

The VTP is not the only thing left from the court order. Ravenswood receives additional funds (I believe 4 million) each year to carry out many instructional programs under the “Ravenswood Improvement Program” clause. A judge decided after the “Model School” study to not create a new school.

The court order explicitly states that “minority” is defined by the State Superintendent of Public Instruction and they still consider Asians as such. Biracial students have been using their minority identity to quality for Tinsley so PAUSD should count more than one race in their calculation. I assume PA would want to leave Tinsley especially since they’re objecting Stanford’s development plans citing overenrollment.

Report Objectionable Content
Email Town Square Moderator
5 people like this
Posted by Raplace Eichman
a resident of Menlo Park
on Mar 31, 2019 at 12:21 pm

The reporter of this article says that
He estimates Ravenswood will lose 583 students by 2021. In sharp contrast, the district had estimated in January that it would lose 136 students over the next three years.

"In sharp contrast, the district had estimated in January" Why is Mr. Eichman getting paid so much money when he does not know how to do his job. Ronda White has corrected him a couple of times. This is clear evidence that he cannot do the job right even when the district keeps paying Ms.Prima (former CBO) to assist him. Board Members, please replace Mr. Eichman with someone who has more knowledge of Mathematics. The same thing with the HR Director, she is not qualified to do the job. We cannot keep paying consultant after consultant to help unqualified administrators, if you know they cannot do the job, they should not be hired. It is a waste of money when we are in a financial crisis.

Eichman has been either lying all along pretending that the district is not in crisis, or he is plain bad at Mathematics. He lied for Gloria so much to cover for her, an example is that many times he said at the KIPP community meetings and after Gloria is gone he puts on a show to impress KIPP to let the know that there is space available at the same location they are at. Pretty amazing, that there was no space, and now there is. I guess he knew Gloria was gone, and she is not there to cover for him either. I am glad Gloria is gone and could not disappear Belle Haven.

Given the quality of education Ravenswood provides, why would anybody be surprised by the White, Brown, and whatever else flight from this poor excuse for a school district? It doesn’t get much worse than what Ravenswood offers and the enrollment figures simply reflect what the district offers. As East Palo Alto’s economic base has grown, the community is essentially giving its district the proverbial “back of the hand”.