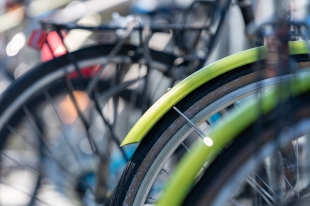 Palo Alto will extend its bike-share and electric scooters program by a year under a consent calendar item approved by the City Council on March 18, 2019. Weekly file photo.

The last bike share program failed miserably because there were too are bikes available to make the system usable. For example, there were none at all in Midtown. I hope this new system has the bikes spread out around town more equitably.

How to make bicycling better. is a registered user.


Most residents of the city who want to bike have a bike--except some apartment dwellers who may not have room to park a bike. Visitors and local workers, however, could really benefit from this. Put bike share bikes at businesses so people can bike to lunch. Put them at train stations for "last mile" trips. Put them at hotels for guest use.

As a resident who bikes for most of my trips under five miles in this town, I would really appreciate more convenient bike parking (U-racks, please) where I can lock my bike and keep it safe from theft. Grocery stores, restaurants, coffee shops, hardware stores, pharmacies, shopping centers. I spend a lot of money with these businesses and I visit them on my bike. I don't like to waste time searching for bike parking while gas guzzling cars are given ALL of the available parking space. Please make room for your bicycling customers.

Biking is a great way to combine transportation with healthy exercise--and it reduces greenhouse gas emissions. I'm 60, slim, and happy--largely because I don't sit on my butt in a car all of the time. Most importantly, biking is FUN! I'm much happier on my bike than in a car.

Come on! Let's go back in time with these archaic modes of transportation! It's 2019 and Palo Alto needs to move into the future with flying cars not bicycles!

Report Objectionable Content
Email Town Square Moderator
9 people like this
Posted by parent
a resident of Midtown
on Mar 21, 2019 at 3:20 pm

Palo Alto has been installing more U-lock-compatible bike racks around town, but a U-lock is no match for a motivated thief with a lot of time on their hands. The Caltrain stations are known to have a terrible bicycle theft problem since commuters lock their bikes there all day and there is little foot traffic during the middle of the day. Bike share would be a great way for people to ride from home to the train stations without having to worry about having their bicycle stolen. Bike share at the train stations only works if bike share is also available in residential areas so people can ride from home to and from the train stations. Same goes for people biking to work in Palo Alto at employers that do not have indoor bicycle parking. I understand that employees of the Palo Alto Weekly newspaper have had their bicycles stolen since that company does not allow employees to bring their bicycles indoors.

Report Objectionable Content
Email Town Square Moderator
6 people like this
Posted by Car-Sharing Is Better
a resident of another community
on Mar 21, 2019 at 3:29 pm

Car-sharing would be better. Cars can cover more distance & are not restricted by inclement weather.

Being an environmentally conscious city, a fleet of EVs should be made readily available to all residents & visitors in Palo Alto.

Report Objectionable Content
Email Town Square Moderator
12 people like this
Posted by midtown senior
a resident of Midtown
on Mar 21, 2019 at 4:03 pm

midtown senior is a registered user.


The failure of the bike program through little ridership is no surprise.
Locals who want to ride overwhelmingly own their own bikes. Visitors have mostly driven here and won't borrow bikes. Train commuters don't trust the bike parking enough to leave theirs overnight. And so on and so on. Automobile ride-sharing still puts cars on the road. Autonomous car fleets will put still more strain on the roads and add to traffic unless they find parking space. Our aging population can't ride bikes and public transport is a disgrace. Uber-style transport has proven to be more costly than car ownership. Meanwhile our Council continues to try social engineering through road diets that only make traffic worse. It 's time to stop this nønsense, understand that car traffic will continue to increase and invest in parking and roads that support through traffic.

Report Objectionable Content
Email Town Square Moderator
10 people like this
Posted by John
a resident of East Palo Alto
on Mar 21, 2019 at 9:18 pm

Great news! I read several people saying people who want to ride a bike have their own bike. That's true, however, the risk of theft is too big to bring your own bike downtown and leave it there, even locked. Bike sharing program is the best solution!

Personally, I would love it if Palo Alto and East Palo Alto could partner to have one integrated bike sharing system. East Palo Alto is boring as no place to go out and I find myself driving 10 minutes to downtown Palo Alto a lot when I could easily bike this distance. Especially now with the new bike bridge over 101 that will open soon.

Report Objectionable Content
Email Town Square Moderator
8 people like this
Posted by Downfall
a resident of Fairmeadow
on Mar 22, 2019 at 12:46 am

Please do not allow electric scooters to come. They (and their riders) are a nuisance riding on sidewalks where they have no place and are not allowed. Unless the police are going to step up and actually enforce not riding the scooters on sidewalks the city should not allow the scooter vendors to come.

Report Objectionable Content
Email Town Square Moderator
18 people like this
Posted by Put On A 'Brain Bucket' & Go!
a resident of Mountain View
on Mar 22, 2019 at 7:58 am

> Our aging population can't ride bikes and public transport is a disgrace.

Quite true. An elder falling off a bike could prove fatal & the seats on busses & trains are dirty...the leaky poop factor.

I'm 62 & ride my '47 Harley 'knucklehead' to work most of the time. It's loud but takes up less space in traffic & I can weave to the head of a re light intersection every time.

My commute time is accelerated & I can beat any car to work from the same starting point any day of the week...guaranteed.

The Harley also burns less gasoline than a car so I am being environmentally concious as well...less polution too.

Report Objectionable Content
Email Town Square Moderator
8 people like this
Posted by Senior Biker
a resident of Duveneck/St. Francis
on Mar 22, 2019 at 1:36 pm

Senior Biker is a registered user.


Palo Alto's flat, shady street are nice to bike. I am a senior, and I bike a lot. Bicycling improves balance, strength, and aerobic fitness. I use my bike and my feet for transportation almost every day. It keeps me fit and feels great!

The routes I take on a bike are a little different from those I'd pick driving a car. I avoid Alma or San Antonio, for instance, and pick parallel routes on Bryant, Park, Charleston/Arastradero. I ride quieter streets and streets with good bike facilities.

I agree with downfall about the dangers of electric scooters. One bad accident, one rider in ICU or dead god forbid, is that what needs to happen to outlaw scooter sharing? If individuals want to ride their own scooters I'm fine with that.

Report Objectionable Content
Email Town Square Moderator
2 people like this
Posted by Samuel
a resident of St. Claire Gardens
on Apr 23, 2019 at 9:49 pm

Biking vs motorbikes vs EV or e-scooters

1) No Pollution: Only Biking (not e-bikes) are the truly green way of going around.
If we are truly environmental conscious, we may consider other transports with less pollution or go straight to "No-pollution".

2) Car congestion: Congestion due to several reason, high private car ownership or poor public transport. And in our case, it is both. We could consider giving free public transport and subsidize bike-rentals by taxing on excessive car ownership, esp those families where the number of cars exceed number of family members. (Need vs wants) Alternatively, give tax breaks/credits for those who cycle to work in exchange for cars. :)

4) Bike Network Effect = for a successful bike share program, the program needs users. Users needs convenience and accessibility to bikes. Sounds like a chicken-and-egg problem, just that it is a bike-and-user problem. To break this vicious cycle, just go in good faith, and install as much bikes as required and see the magic that happens.

Bottom-line: focus on increasing bike lanes and rental bike availability, and the adoption rate will increase.
(Akin to Tesla superchargers (infrastructure) and their car adoption rate)

You can get someone from MIT to perform the system-dynamics causal loop diagram to analyze this effect further, if you are keen.