Just the two of 'Us' 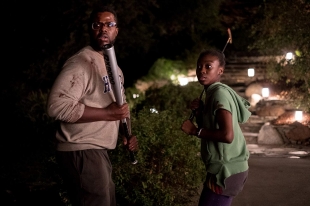 Winston Duke and Shahadi Wright Joseph are terrorized by doppelgangers in Jordan Peele's new thriller "Us." Photo by Claudette Barius/Courtesy of Universal Pictures.

What will surely be the single-most commonly cited moment of "Us" is when a dumbfounded American dad asks psychopathic home invaders, "What are you people?" and they answer: "We're Americans." It's a punchline and a promise of scary, but satirical, social commentary in Jordan Peele's follow-up to his smash success "Get Out."

While Peele has tried to frame "Us" as more of a straight-ahead horror movie not built to sustain that kind of thematic weight, audiences have come to expect his pop-horror films to spark reflection on our existence and our society.

In a dynamic performance already generating Oscar buzz, Lupita Nyong'o stars as Adelaide Wilson, a woman who only very reluctantly accompanies her family on a vacation to Santa Cruz, California. Her apprehension stems from a trauma in her youth, when she unaccountably encountered her own doppelganger in a hall of mirrors at the Santa Cruz Beach Boardwalk. (This initial 1986-set sequence also allows Peele to geek out on a few '80s references, including a nod to the Santa Cruz-set "The Lost Boys.")

Adelaide's fears prove founded when she, her husband, Gabe (Winston Duke), and their children Zora (Shahadi Wright Joseph) and Jason (Evan Alex) find themselves staring down their evil twins. These are the "Tethered," a doppelganger conception so deeply unnerving it could conceivably launch a whole new craze in horror, as "Night of the Living Dead" did for zombies. Driven mad by exclusion and isolation, these shadow selves range from enraged to downright feral homicidal mania, and all they want is American life itself. Their deep-red jumpsuits and sandals say doomsday cult, but their shears say murderous home invaders.

"Us" largely plays as a more stylish, sci-fi take on "The Purge" franchise, which inhabits similar thematic ground. Both movies play upon Americans' guilt for their largely lucked-into plenty and the anxiety that they're a class revolt away from having it all violently taken. Capitalism means a dog-eat-dog world: For us to thrive, others must suffer, and but for the sheer randomness of the universe, it could be "us" on the other side of the looking glass.

It's precisely because Peele is taking on ideas this heady that "Us" manages to be almost equal parts provocative and somehow a bit of a letdown. When "Us" finally gets literal about what's going on, the rushed exposition begs more questions than answers.

Peele's messy stew of allusive ingredients and jokey allusions (shamans and wizards, white rabbits, Beach Boys vs. N.W.A.) can be overwhelming, but it gives us a helluva lot more to chew on than a "Halloween" reboot.

Some will find the film's psycho-killer insanity a bit overworked, but Nyong'o's impressive dual performance goes a long way to making the scares work from both sides of the equation: scream queen and relentless monster.

When "Us" reckons with who created that monster, it adds one more twist (of the shears) to Peele's latest scary-funny-provocative trip into an American twilight zone.

The first few seconds after awakening; before I remember the virus
By Chandrama Anderson | 0 comments | 3,367 views

Can you stay healthy without making more trash?
By Sherry Listgarten | 6 comments | 2,782 views

Think about helping others in our coronavirus-affected area
By Diana Diamond | 7 comments | 2,561 views