Top marks in track and field at Dublin and St. Francis 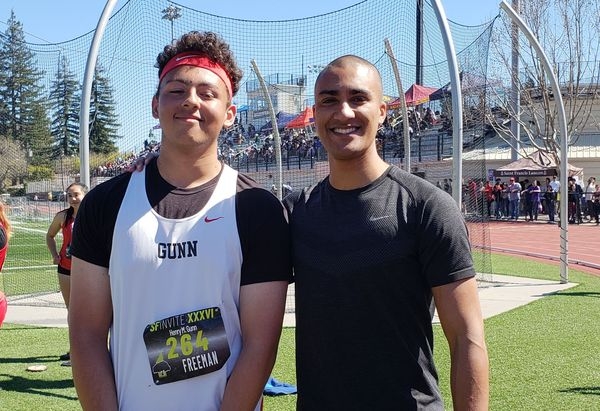 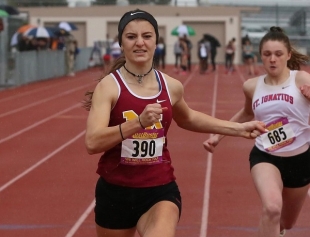 Jessica Eagle set a meet record 12.20 in the 100 at the St. Francis Invitational. Photo by John Hale.

Menlo School junior Charlotte Tomkinson raced 2:10.61 in the 800 meters at the Dublin Distance Fiesta on Saturday, the top mark in the state.

Junior Kyra Pretre was fourth with a personal best 2:14.61, seventh in the state. The Dublin meet produced four of the state's top 10 marks, including Menlo's duo. Concord's Rayna Stanziano finished .61 seconds behind Tomkinson with the state's second best time.

Castilleja's Moorea Mitchell
Knights' sophomore Marisa Castagna finished in the top 10 percent of the race with a PR of 2:29.48.

Pretre and Tomkinson were joined by Lauren Hamilton and Maddie Sanders for the distance medley relay, which placed third in a school record 12:30.09.

Gunn senior Jared Freeman was a double winner, setting personal bests in winning the shot put (53-1) and discus (158-4), both the top marks in the Central Coast Section. Freeman's discus throw was a meet record.

Menlo-Atherton's Noa Ngalu, who will be playing football at Washington in the fall, placed second in the discus with a PR of 152-4, No. 2 in the CCS. He was ninth in the shot put with a mark of 45-9.

Palo Alto's Donald Taggart and Alex Evans each placed among the top six in their respective events. Taggart was fourth in the 3,000 with a time of 9:06.36 and Evans went 4:30.19 to place sixth in the Invitational Mile. Paly's John Tayeri was eighth in the high school mile in 4:47.38.

On the girls' side, Menlo-Atherton's Jessica Eagle set a meet record in winning the Invitational 100 in a CCS-best 12.20. Menlo's Michelle Louie was third in 12.63.

Casti's Moorea Mitchell placed third in the shot put with a PR of 38-7, Gunn's Aparna Gajulapalli was fourth in the discus with a mark of 99-0 and Woodside's Katherine Meade was fourth in the high jump with a height of 4-10.

The first few seconds after awakening; before I remember the virus
By Chandrama Anderson | 0 comments | 3,607 views

Can you stay healthy without making more trash?
By Sherry Listgarten | 6 comments | 2,992 views

Think about helping others in our coronavirus-affected area
By Diana Diamond | 7 comments | 2,727 views