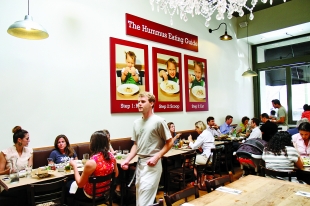 The original Oren's Hummus in downtown Palo Alto. The company is launching a new line of "express" locations. Photo by Michelle Le.

In the latest Shop Talk column, read about Palo Alto-born Oren's Hummus' expansion plans and the closure of a longtime local Starbucks.

MIDTOWN STARBUCKS CLOSES ... After nearly two decades in Palo Alto's Midtown neighborhood, the Starbucks store on Middlefield Road closed its doors for good on Jan. 25, a representative for the store's landlord confirmed. The Starbucks at 2775 Middlefield Road had been in the community for 18 to 19 years, according to real-estate broker Tim Foy of Midtown Realty. He did not know why the store left the neighborhood, but said there were no changes to the lease agreement prior to the closure. The Midtown location is likely one of 150 underperforming stores in "densely penetrated markets" Starbucks planned to close in fiscal year 2019, according to a June press release. A Starbucks shop at 863 El Camino Real in Menlo Park reportedly closed on Feb. 1, according to a poster on Yelp.com. Employees who worked at both stores have been transferred to neighboring locations. The owner of the building at the Middlefield site is in talks with potential tenants, according to Foy. Under city zoning laws, the space prominently situated at the corner of Middlefield Road and Colorado Avenue has to be occupied by either a retail store or a restaurant. According to a store locator map on the Starbucks website, there are still 10 stores in Palo Alto, East Palo Alto, Stanford University and Stanford Shopping Center. -- J.P.

MORE HUMMUS AMONG US ... Fans of Oren's Hummus will soon have another local outpost where they can rip, scoop and eat: Town & Country Village in Palo Alto. "Coming soon" signs for the popular Israeli eatery were recently put up at the former location of Fast Tony's Chicken, toward the back of the 855 El Camino Real shopping center. According to a press release, this will be the first of several "express" versions of Oren's that will focus on quick, grab-and-go service. They plan to open more Oren's Hummus Express locations in downtown San Francisco and the East Bay by the end of the year and "anticipate carrying the brand out of the Bay Area with an expansion in 2020," the release states.The 855-square-foot space at Town & Country will be open seven days a week with a counter where customers can order hot items made for pick up as well as to-go orders. The menu will feature Oren's "greatest hits with a few new items," the release states. Namesake Oren Dobronsky, an Israeli-born technology entrepreneur, opened the first Oren's in downtown Palo Alto in 2011. With an eye toward expansion, Dobronsky and his wife, Nancy, partnered with restaurant consultant Mistie Cohen and her husband and Oren's executive chef, David. Together, the co-owners went on to open locations in Mountain View, Cupertino and last summer, San Francisco (the only location that serves breakfast to date). The restaurant's menu is full of Israeli staples, from hummus and falafels to kebabs and shakshuka to baba ganoush and bourekas. Oren's also makes whole wheat and gluten-free pita. The first Oren's Hummus Express will open in April. -- E.K.

Compiled by the Weekly staff; this week written by Elena Kadvany and Jamey Padojino. Got leads on interesting and news-worthy retail developments? The Weekly will check them out. Email shoptalk@paweekly.com.

These local restaurants are donating meals to Bay Area residents in need. Here's how to help.
By Elena Kadvany | 6 comments | 11,163 views

Coronavirus: Plan ahead now for a big outbreak
By Diana Diamond | 19 comments | 4,183 views

Will the Coronavirus Save Lives?
By Sherry Listgarten | 29 comments | 3,938 views

The first few seconds after awakening; before I remember the virus
By Chandrama Anderson | 0 comments | 1,039 views