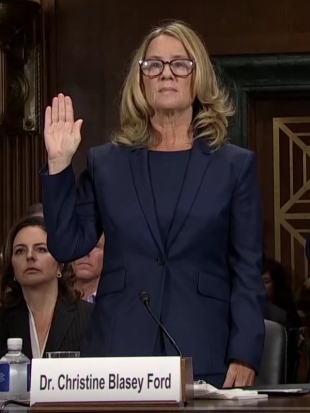 In the latest Around Town column, state Assemblyman Marc Berman announces his district's woman of the year, Palo Alto hires consultants to help implement organizational change and a local man wins an award for his voyages around the world.

STANDING TALL ... Palo Alto resident Christine Blasey Ford, who has become known for going public with her sexual-assault allegations against now-Supreme Court Justice Brett Kavanaugh, has been selected as the 24th Assembly District's Woman of the Year, state Assemblyman Marc Berman's office announced on Monday, March 4. Ford, 52, a psychology professor at Palo Alto University, was picked for her "remarkable act of courage" in testifying about her claims before the Senate Judiciary Committee in late September. "Dr. Ford exhibited strength and dignity under the most extraordinary conditions, and in telling her truth, she paved the way for countless other survivors to tell their own," Berman said in a statement. Ford is currently not teaching classes at the university, but is continuing to conduct biostatistics research and work with doctoral students. "I'm very grateful to Assemblymember Berman for this recognition, particularly his understanding that fulfilling my civic duty came at a personal cost to my family," Ford said in a statement provided by Berman's office. She will receive the award at a private event later this month, according to the assemblyman.

CONSULTATIONS ... It's no secret that Palo Alto is struggling to fill the gaping holes in its leadership ranks, with the current list of vacancies including fire chief, chief financial officer, assistant city manager and chief transportation official. Some of these positions are now filled on an interim basis; others aren't filled at all. On March 4, the City Council took a step to address the leadership challenges at City Hall when it approved $450,000 in contracts with four different consulting firms: BluePoint Planning, Bovo-Tighe, Management Partners and Municipal Resource Group (MRG). Under the three-year contracts, the consultants will be charged with helping the city implement organizational change, provide leadership training and help develop a performance-management system at City Hall. A report from the Utilities Department cites retiring baby boomers and a "highly competitive job market" as reasons for the multitude of vacancies, both in Palo Alto and in other cities. The City Council approved the contracts on its consent calendar, with no discussion or dissent. But Councilman Greg Tanaka, who was absent, registered his concerns in a letter to City Manager Ed Shikada, in which he questioned the need for the consultants. In his response, Shikada wrote that the city's 18 departments "are in need of organizational development professional services to maintain and enhance service deliveries, implement continuous improvement programs and operate effective work teams." In addition to these four contracts, the council approved adding $100,000 to the city's separate $300,000 contract with MRG to help Human Resources manage "highly sensitive and complex personnel matters." And the March 4 approvals came just one week after the City Council agreed to hand over management of the Office of the City Auditor to the consulting firm, Management Partners, while the city weighs long-term organizational changes to the small office.

BORN TO SAIL ... Stan Honey of Palo Alto has gained recognition for his accomplished journeys as the Cruising Club of America's 2018 Far Horizons Award recipient. The prize is given to a member or members of the organization for "a particularly meritorious voyage or series of voyages that exemplify the objectives of the Club," the organization announced on Wednesday. Honey has 22 sailing records under his belt as either a navigator or single-handed skipper. In 2010, he was a navigator on the trimaran Groupama 3 that set a record for the world's fastest global circumnavigation at 48 days, seven days and 45 minutes. Honey also holds 30 patents in navigation and graphics and has won an Emmy for technology that was used in the 2013 America's Cup.

She has inspired many, including Republican senator McSally, who recently spoke of her rape while in the military.

10 people like this
Posted by Resident
a resident of Another Palo Alto neighborhood
on Mar 8, 2019 at 8:20 am


Report Objectionable Content
Email Town Square Moderator
24 people like this
Posted by Ford rocks!
a resident of Evergreen Park
on Mar 8, 2019 at 9:33 am

Which sad sign are you referring to? That Dr. Ford had to speak up for a nomination with terrible judicial temperament, or Senator McSally highlighting that 2/3rds of females in the military face harassment, abuse and/or rape?

Report Objectionable Content
Email Town Square Moderator
18 people like this
Posted by Politics?
a resident of Mountain View
on Mar 8, 2019 at 11:52 am

Sad that someone who got drunk at a college party and went upstairs to a bedroom with two boys and then claimed to be assaulted (to-date has NOT been corroborated) is being recognized for bravery.

This has actually been a fantastic teaching moment for me with my daughter. Definitely an example of who NOT to be and what NOT to do.

Report Objectionable Content
Email Town Square Moderator
17 people like this
Posted by Neal
a resident of Community Center
on Mar 10, 2019 at 10:24 am

Neal is a registered user.


This is a desperate attempt by Marc Berman to curry favor with the #MeToo movement. Are you kidding me? Woman of the Year? You mean there aren't more talented and more deserving women in your district? This is a shameful political decision.

Report Objectionable Content
Email Town Square Moderator
12 people like this
Posted by Resident
a resident of Downtown North
on Mar 10, 2019 at 11:48 am

@Neal, I don't disagree, but anyone who hasn't noticed that Marc Berman is a pandering, low-wattage, wannabe political hack hasn't been paying attention. After the 10th effort to pander (can we possibly here more about all the great things Berman has done for education?), it becomes our fault if we re-elect him.

Report Objectionable Content
Email Town Square Moderator
18 people like this
Posted by South Gate
a resident of Evergreen Park
on Mar 10, 2019 at 12:53 pm

South Gate is a registered user.


@Politics?, Neal, and Resident - really? This woman had nothing to gain. She lives a quiet, academic life with her family here in Palo Alto and as soon as his name was floated she reached out to her representative. She didn't get a lawyer because she didn't think she needed one. She came forward with notes from her therapist and she was the most authentic person ever to set foot in that capitol building. They had no idea what to do with her. In fact, they were too scared to ask her questions. This woman's life has been threatened, her life has been turned upside down, she's been attacked. Any way you shake it, this woman is BRAVE. And she inspired so many people. At the women's march in DC this year there were countless signs thanking her for speaking up and giving them the strength to come forward.
You might not like that she came forward, but if you've fooled yourself into thinking the FBI actually followed every lead she gave them, you are kidding yourself. Shame on you for re-victimizing a victim.

Report Objectionable Content
Email Town Square Moderator
10 people like this
Posted by Resident
a resident of Downtown North
on Mar 10, 2019 at 1:20 pm

"Shame on you for re-victimizing a victim."

[Portion removed.] I just criticized Marc Berman for pandering. I'm sure Ms. Ford can do without his "recognition."

Report Objectionable Content
Email Town Square Moderator
5 people like this
Posted by Don't Be EVIL Companies
a resident of Another Palo Alto neighborhood
on Mar 10, 2019 at 3:39 pm

Per the unfilled positions:

Take a page from many local churches that cannot afford to provide living wages if the cost of housing is factored in -- this is not recent and goes back many many decades. Many churches have parsonages that the church owns and renovates between pastors. Some large churches own many parsonages. Thus, the church gets the benefit of owning the property in the long term and stabilizing the costs.

The way our City and School district have handled executive housing has been to pay a ginormous salary and also pay for a gigantic housing allowance that only grows. If the City were to buy some housing all over town, in different neighborhoods, and give the new executives a *renovation* allowance, free rent, then it would be a whole lot easier to attract talent. If the City were to allow people to invest in the property as a kind of BMR and take a portion of the profit when they leave (and the property only sold to incoming City and School employees at BMR), then just as Stanford does, the employees could have BMR housing and also benefit from their homes to a degree.

Not only would this make us very attractive, but there will be less turnover, and the employees would live in town in a way that makes them another resident (understanding the impacts of their decisions on the very places they, too, live). They won't be so quick to abuse residents and treat them like mushrooms and the dirt they grow in.

This is the model upon which all stability is predicated in this area and has been since the '70s at least. The City should also be implementing a corporate head tax for large companies, and use that to buy employee housing and also to buy the retail areas around town. (Own the land, Stanford model.)

Report Objectionable Content
Email Town Square Moderator
16 people like this
Posted by Politics?
a resident of Mountain View
on Mar 10, 2019 at 7:12 pm

@Soutgate yes, I absolutely stand by my words. I’m a woman and she is NOT a role model I would hold up for any reason and it’s frightening to me that so many do. The current trend of victimization weakens all the strides women have made these past 30-40 years, it is shameful. My formative career years were in the mid-80’s, I went head to head with men at a Fortune 5 company and a very well established good ole boy network. I had sexual advances to the point of what is now called “assault”, it was wrong, but I pushed back and stood strong and I refused to feel threatened. [Portion removed.]
She is a victim of her own making but I truly hope she has grown and can find peace with her actions.

Report Objectionable Content
Email Town Square Moderator
7 people like this
Posted by Cynic
a resident of Crescent Park
on Mar 10, 2019 at 8:17 pm

Report Objectionable Content
Email Town Square Moderator
2 people like this
Posted by Politics?
a resident of Mountain View
on Mar 10, 2019 at 9:00 pm

The first few seconds after awakening; before I remember the virus
By Chandrama Anderson | 0 comments | 3,601 views

Can you stay healthy without making more trash?
By Sherry Listgarten | 6 comments | 2,988 views

Think about helping others in our coronavirus-affected area
By Diana Diamond | 7 comments | 2,723 views