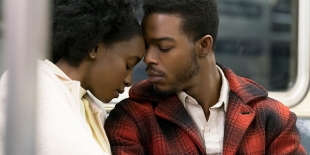 Stephan James and KiKi Layne star in "If Beale Street Could Talk." Courtesy of Annapurna Pictures.

'Are they ready for fully innovative Indian food?' Ettan arrives in Palo Alto with chaat, caviar and a secret menu
By Elena Kadvany | 1 comment | 3,815 views

Flying: How to lower your impact
By Sherry Listgarten | 15 comments | 2,740 views